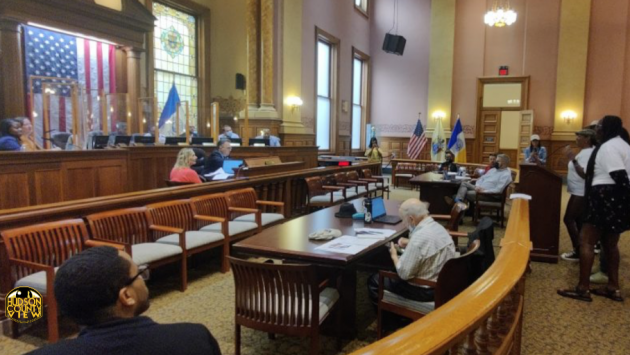 “These mass murders are truly tragic and heart-wrenching. They occupy the media’s attention, and then it fades away, and it’s the people doing this work every day that are the heroes. So, it’s important we call attention to gun violence,” Solomon said to applause.

He also thanked those who have been working to prevent gun violence.

“I think this is a step in the right direction just to highlight gun violence, especially on the local level. We lose a lot of individuals in Jersey City to gun violence. We get a lot of collateral damage. No amount of money can compensate you for the work you do,” Gilmore said to applause as well.

The measure passed unanimously (8-0) and others from the dais weighed in before voting aye.

“There has not been a single week this year in which we haven’t had one mass shooting,” said Councilwoman-at-Large Amy DeGise.

According to the resolution, every day more than 110 Americans are killed by guns while more than 200 who are shot and wounded, and on average, there are nearly 16,000 fatal shootings per year.

Additionally, it says that Americans are 26 times more likely to die from gun homicide than people in other high-income countries.

The council lauded the work done by the JCAVCM, Hudson Partnership CMO, and the Jersey City Medical Center.

“Ever since I met you, you’ve always been in the trenches. I understand when you started the program, and nobody believed it … I believe the best is yet to come,” Watterman said to Johnson.

“I am happy to be here with some of our team, and I say thank you. We all have to make an impact in whatever that passion or calling is,” Johnson said.

“The comprehensive gun reform bill was first introduced in 2021, and it has sat in the state legislature. It’s time we moved these gun measures forward. A lot of guns come through, and that’s what part of the problem is,” Prinz-Arey said.

Ward D Councilman Yousef Saleh noted that Murphy has been a nationwide leader against gun violence.

“We as a legislature need to back those kinds of initiatives supported in order to support those groups that are fighting gun violence,” he said.

Everyone else on the council appeared to be on the same page.

“A lot of work has to be done. I am happy the state and city will be at the front of that,” DeGise said.

“This is important. We all know that gun violence is going on in the country. We would just hope the federal legislature would act,” Watterman said.