The Jersey City Council approved an emergency meal contract for a vendor that has faced some scrutiny recently, while a resolution denouncing Islamophobia was pulled in hopes of improving it for next month’s meeting. 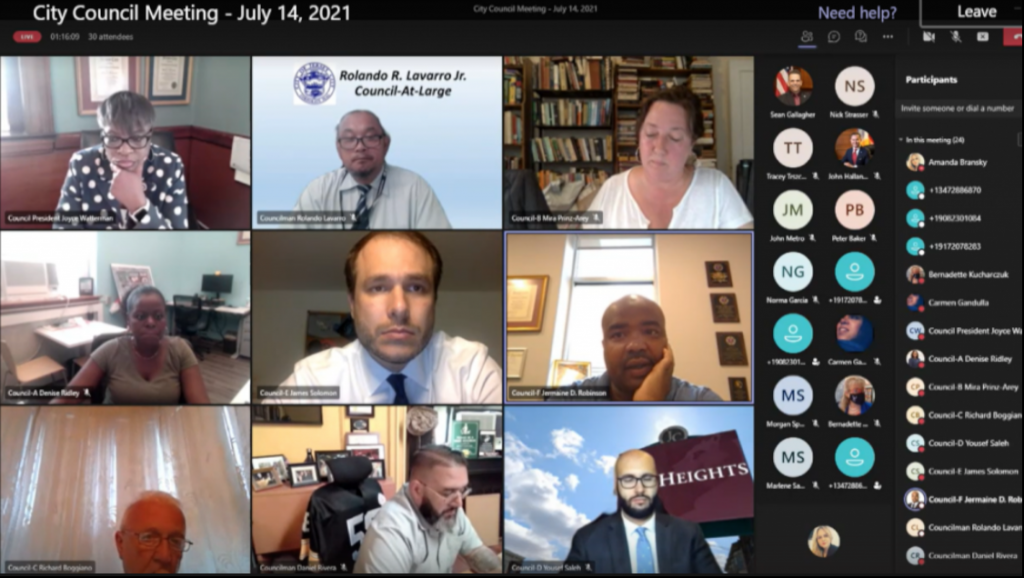 Watterman noted that late Ward D Councilman Michael Yun often brought up the issue of senior meals being of a poor quality, which led to the council changing vendors.

“These kids are without food if they are not eating,” she added.

While some complaints were fielded about the food the children receive, that contract was approved last month, the contract in question was to provide food to families as a pandemic emergency measure, Baker pointed out.

Director of the Division of Food and Nutrition for the Department of Health & Human Services Angela Davis explained Red Rabbit has been providing emergency meals in the midst of the pandemic since last October and that many have expressed satisfaction with them.

“The families really do depend on that food … I think it’s kind of a mixed thing going on,” she told the council.

“We haven’t received complaints from the families, but we discussed at the caucus the transportation of the food,” Councilman-at-Large Daniel Rivera said.

“When the food arrived, it was rejected by the site, which is proper protocol to ensure the safety of the kids,” Powell explained.

He continued that they have since implemented changes including purchasing refrigerated trucks and ensuring they have adequate coolers and ice, along with soliciting feedback on the quality of the meals.

“Is there a continued plan for improvement because I visited the sites today myself. I tasted the food, and personally, I wouldn’t feed it to a stray cat,” exclaimed Ward D Councilman Yousef Saleh.

“I think it lacks taste and if this is what we’re giving our children what are we giving to the people that are the most food insecure?”

He added most are likely to be reluctant to speak up because they don’t want to bite the hands that feeds them.

“It felt fake. The muffin tasted like styrofoam. I probably would have rather eaten the styrofoam. So what’s your plan?,” Saleh pressed.

Powell responded that he hears most people like their food and that their their meals are cooked in a kitchen.

“We do bake those muffins from scratch. We’ve been baking them for 10 years,” he said.

He noted in the past children didn’t like the pasta salad which was replaced with a turkey sandwich.

“We’ll keep making those changes as we move forward,” he added.

Watterman subsequently asked Davis for a list of the sites where meals to school children are being distributed.

“I’d encourage the council to do surprise visits. This way here you’ll know if the food has improved or not. If it has not improved because this is not the contract we’re voting on, I know we can always speak to the Law Department on that contract,” she said.

“This government programs really ask a lot of our vendors in terms of how much they’re reimbursed,” noting that  they’re cooking meals at a cost of about $1.75 and $2.92 a piece for breakfast and lunch, which were the lowest bid.

While Watterman continued to express her concerns about the city’ school children, Ward F Jermaine Robinson called for his colleagues to focus on the task at hand.

“This is not that contract. We need to keep feeding the 200 families a day … As a restaurant owner myself, I get it,” Robinson said, lamenting that no food item is ever going to receive

Prior to her vote, Watterman reiterated that the agreement they’re voted on was for emergency meals, not meals for students. She resolved to visit some of the sites.

“And if the food is not appealing … or distributed the right way, then I think we will have to revisit their contract concerning the summer program,” Watterman said before voting yes.

The contract was ultimately approved by a tally of 6-3.

Additionally, the Jersey City Council discussed a resolution introduced by Solomon condemning Islamophobia, but he opted to pull the measure to improve it for the August meeting.

Jersey City Board of Education President Mussab Ali lauded the governing body for attempting to address the issue, but said he “was a little disappointed” with the wording and called the current draft merely symbolic.

“We’re kind of ripping of Black Lives Matter,” Ali said regarding the phrase “Muslim Lives Matter” in the resolution.

He also didn’t like them saying other religions and philosophies were worthy, saying it was declaring something to the effect of “All Lives Matter.”

“There’s no tangible steps listed in this resolution, it seems very symbolic in nature,” also expressing displeasure that neither he of Saleh, the city’s two Muslim elected officials, were consulted on the matter.

Atif Qadir, a Hoboken developer and planning board commissioner, said there’s a lot of violence against Muslims in recent memory when he addressed the council.

“It’s a really significant uptick in both small and large acts of violence against Muslims in America,” he said.

“My mom, who’s an American citizen just like me, was hit by a driver who kind of moved toward the edge of the road in order to hit her on purpose,” Qadir stated, noting she was dressed in traditional Muslim clothes at the time of the incident.

“By voicing support for Muslims in our city and our state, what you’re doing is a really positive thing and it’s going to be really useful.”

While Saleh thanked Solomon for introducing the resolution, he also expressed that he should have been consulted on it.

“As the sole Muslim Council member and the first elected one for Jersey City, I think that I should be consulted in a meaningful way when it comes to the Islamophobia or anything relating to my community,” he explained.

He thanked Solomon for pulling the resolution and vowed to work with him on it.

Solomon pointed out that he drafted the resolution after having a conversation with Qadir and agreed that it could use some improvement.

“The resolution came about because Mr. Qadir reached out to me. I did outreach to a number of folks, but I acknowledge that it could be significantly improved,” he began.

“I look forward in August to coming back with a strengthened resolution led by Councilman Saleh.

The council also passed the first reading of a cannabis ordinance included suggestions from the planning board, as well as splitting tax funds 50/50 between the public schools and social equity.

The governing body did double duty on Monday, with their morning session largely revolving around establishing a Cannabis Control Board and the special meeting in the evening dedicated to figuring out how to distribute the related tax revenue.