The Jersey City Council named Assistant Business Administrator Barkha Patel as the head of a new department, while members of the public criticized a design they feel would obscure the base of the Katyn Memorial at Exchange Place. 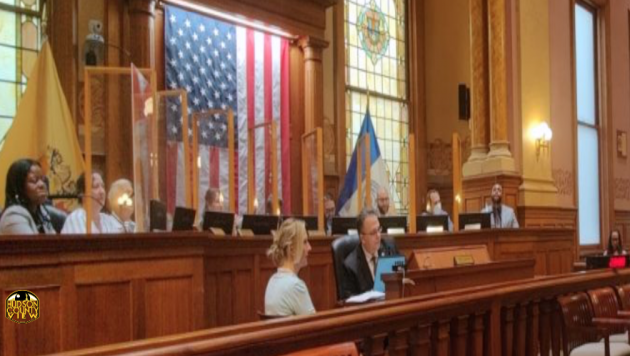 “You have been a great asset to the city: you’ve risen to the occasion,” Ward A Councilwoman Denise Ridley said of Patel.

“It has always been a pleasure to work with someone who is professional,” added Ward B Councilwoman Mira Prinz-Arey added, praising her organic thinking.

Several other council members praised Patel’s work ethic and said she was the perfect choice to head the the new Department of Infrastructure.

“You actually made me fall in love with bike lanes. You put a bike lane down my street. Your family should be extremely proud,” noted Councilman-at-Large Daniel Rivera

“Under the leadership of our mayor, you know we’re creating a new department. Our mayor and our BA, you know, has been a champion for women. This is a testament to how good we are as Jersey City,” stated Council President Joyce Watterman.

The resolution appointing Patel was adopted unanimously (9-0) before Mayor Steven Fulop swore her in.

“Mayor, your leadership … and your faith has meant the world to me … I have thoroughly enjoyed working with all of you,” Patel said at the podium.

She began working for the city in the Planning Department and was then the transportation director before being appointed as assistant Business administrator.

“In many ways, women are running Jersey City. The most important functions and department leaderships are largely led by women,” he said, citing the housing authority, the police, health and human services, and the cultural affairs departments as examples.

During public comment, Jeanne Daly noted that the Jersey City Planning Board passed a resolution on Tuesday approving the Exchange Place Redevelopment Plan just two weeks after rejecting it.

“It’s our right to protest what’s wrong: I’m appalled and embarrassed and disgusted. How does putting this seven-foot high barricade help our view of the waterfront? It is a disgrace what happened last night.”

Jan Baginski concurred with Daly, explaining the Katyn Memorial commemorates the 22,000 soldiers and civil servants who the Soviet Union deliberately killed. Thus, the monument is where the Polish community gathers several times a year.

“We weren’t … aware of the wall that would surround Katyn monument. We have no problem that you develop the place, for example, putting trees and shrubs,” said Kinga Wojtczak.

“We don’t want this monument surrounded by trees because it obscures the visibility. We just request those small changes for you.”

Margaret McGrath asked that they “ensure visibility and access to the monument is not obstructed.”

Ward C Councilman Rich Boggiano agreed and called on the Law Department to overturn the decision.

“It’s a disgrace: I’m asking the Law Department to overturn the planning board decision. The people weren’t properly notified. It is unfair with what happened there. The people of Jersey City weren’t really involved in that decision. Destroying that place is a disgrace. If the Law Department says it can’t be overturned, I’m sure someone in the Polish community will try to overturn it,” he said.

“I had to recuse myself because of it. I know there were community meetings: to say they didn’t have community meetings, that’s just not true,” Watterman said, noting she sits on both the Exchange Place Alliance Board and the Jersey City Planning Board.

The council also approved a year-long contract for up to $100,000 in legal representation from the firm Murphy Orlando LLC in the redistricting lawsuit filed in March by over a dozen community groups and Ward F Councilman Frank “Educational” Gilmore.

The measure passed 8-0(1), with Gilmore abstaining.