The Jersey City Council is considering a resolution to allow a third-party audit to decide if the city’s trash and recycling services should be brought in-house, a measure discussed at yesterday’s caucus meeting. 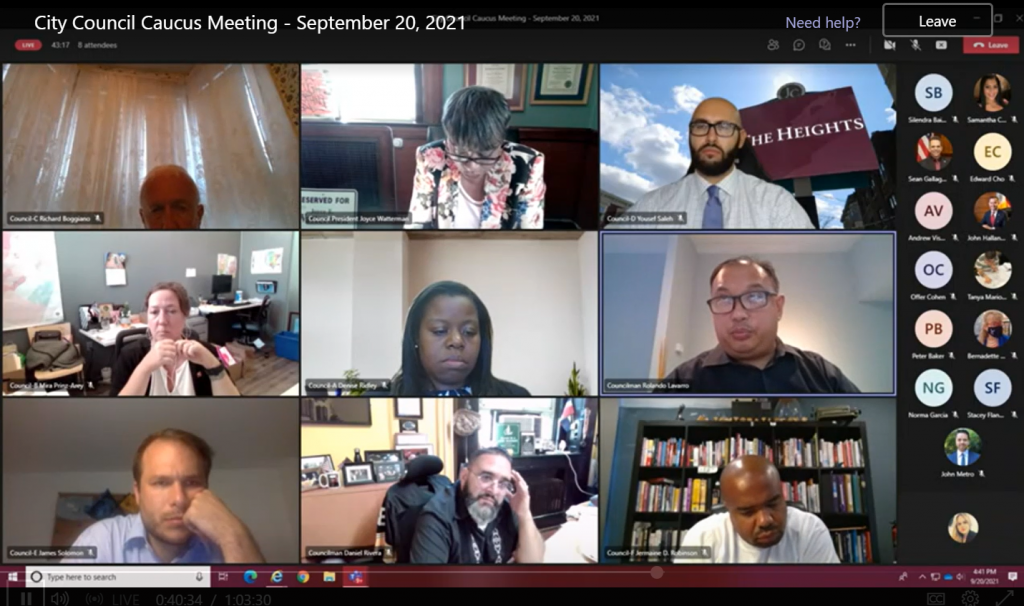 The resolution that will be on Wednesday’s agenda would approve a yet to be named third-party vendor to determine if the city would be better suited to bring garbage and recycling services in-house, rather an outsourced to Regional Industries.

“There’s been some back and forth about some different options. We’ve not received great services based on feedback,” said Ward B Councilwoman Mira Prinz-Arey.

“I had three complaints today, one about recycling, one about garbage dumped all over the streets. I had them appear before the council and nothing was done Last night was a shame. They dropped garbage all over Palisade Ave.: we gotta get our own recycling,” added Ward C Councilman Rich Boggiano.

Residents and elected alike have expressed frustration over Regional for many months, if not years, to the point that the council only approved a contract extension by a 5-4 vote last summer before they received a $77.5 million contract that runs through August 31st, 2025.

“I’m glad folks are coming around to this since literally since back to when Bob Kakoleski was the Business Administrator, I brought it up every time that we should go in-house,” Councilman-at-Large Rolando Lavarro said.

“Has there been a financial analysis to determine the cost of doing this service in-house?

The council also discussed utility issues, which inevitably led to a discussion on the municipal utilities authority’s infamous “water tax.”

“Have Jersey City ratepayers received their rate refunds or their solid waste collection fee imposed on them in their Suez bills?,” Lavarro questioned.

Metro said they are reviewing fees and how much should be credited.

“The mayor himself said there would be refunds,” Lavarro said.

“I got a call today from a woman who got her water bill today, and it was the same as the last one with no refund,” Boggiano said.

“I’m getting a lot of questions of should I pay the fee or not pay the fee. I don’t want to give residents an answer one way or another. I don’t want to tell them not to pay that fee, and then Suez pulls that over their head later on,” added Ward A Councilwoman Denise Ridley.

Metro responded that the city is still reviewing their billing, prompting Lavarro to ask when the property tax bills went out.

The business administrator responded that they were mailed last Monday, and the system is being updated. He said there was a small issue discrepancy, which has since been resolved.

“Residents have 28 days to pay bills with no interest fee, 28 days from last Monday,” he added.

“Can you confirm residents are not being charged interest from August until the tax bills were disseminated?,” Ward D Councilman Yousef Saleh asked.

“Yes, that was correct, councilman. The interest will start accruing in October if they miss the deadline, and the interest would go back to August since that was the original due date.

Lavarro questioned if that was fair, since in the past, estimated bills were issued, but this time around they waited until the budget was approved.

He noted the bill went out with a letter from Jersey City Mayor Steven Fulop touting a tax decrease.

“I understand how that’s played in politics. But the idea that taxpayers, through no fault of their own, are getting a bill that’s issued in early September with a due date of Oct 6. If whatever reason, they pay October 7th, they’re going to be charged interest on August 1st when they never had that bill in their hands,” Lavarro said. “

Whatever reduction thy many have seen as a result … they’re going to end up having to pay significant interest.”

Metro said the interest would be 8 percent or 18 percent interest, depending on how late it was.

“18 percent penalties on those bills through no fault of their own. My question is that fair for them while other people might have the opportunity to tuck some money away while the bill was still coming?” Lavarro asked.

He argued it would especially affect seniors on fixed incomes who don’t receive electronic bills.

“The interest payment is a state statute and a state requirement that it’s imposed after the date,” Metro said.

The discussion continued for a while, with council members urged to petition the New Jersey Department of Community Affairs to adjust the statute and that the pandemic has brought unique financial challenges.

Still, Lavarro noted the administration did not inform the council that this would be done.

“I had raised questions about asking when the bills would go out, and that information was never shared,” he said.

“Those matters are discussed with the tax collector. I wouldn’t have the answer to that,” Metro responded.

Council President Joyce Watterman agreed that it may be time to have a meeting of the minds with state officials.

“The state does this on a regular basis though when we deal with our budget somehow or another. We always get caught like this. Maybe we need to have a meeting with the state also concerning this, because it does affect our residents.”

LETTER: JCEA, Education Matters have worked to silence the Fix it...