While it hasn’t been unusual for Hudson County observers to use the word “explosive” when describing the current political climate in West New York, this is the first time during this election season the term was used literally.

“One of our officers got flagged down by a construction crew and 6022 Monroe [Place]. The construction crew was doing demolition and they discovered what appeared to be a mortar,” Police Capt. Santiago Cabrera told HCV.

“We brought it out, we secured the area, we evacuated the surrounding homes and then we contacted the Jersey City Bomb Squad, just in case, precautionary, to make sure the mortar wasn’t live.”

Cabrera confirmed that the device appeared to be a military-grade explosive, possibly from World War II, and that the Jersey City Bomb Squad had safely retrieved the mechanism and they were bringing it back to their headquarters for further analysis.

He also said that police arrived on the scene at approximately 2:30 p.m. and were wrapping up their investigation around roughly 3:15 p.m.

“They don’t know if it is indeed active, but at this point, there’s no danger,” he assured anyone who may be concerned of a public safety hazard.

Police: Man charged with scamming Bayonne man out of $200k for fraudulent repairs 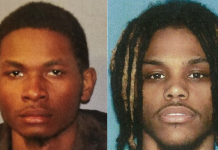