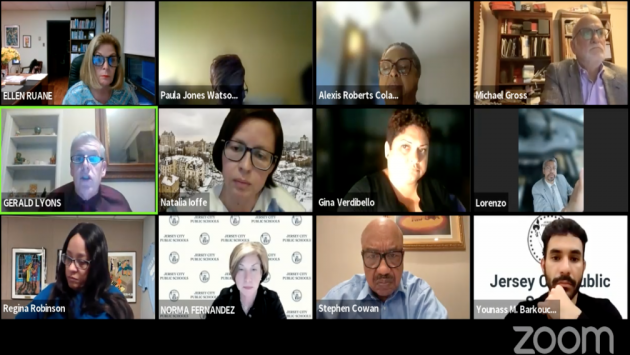 “Really it’s the same, nothing has changed from the original budget, it was submitted and it’s really working towards meeting the grade level standards, the New Jersey learning student standards,” said Acting Superintendent of Schools Dr. Norma Fernandez.

” … We’re working on a strategic plan that addresses students needs and it provides a portrait of a graduate.”

“I would just like to say the revenue shortfall from the payroll tax is about $160 million, as Dr. Fernandez said. The state aid cuts are at $225 million dollars and this is part of the S-2 documents that the state aid will continue based on the equalized valuation of Jersey City,” she added.

Furthermore, Robinson said the overall budget shortfall the district was tasked with making up this year was approximately $184 million.

After Robinson’s brief presentation, the board took an up and down vote, which saw the budget pass 5-4, the same tally the preliminary budget was approved by back in March.

Prior to adjourning, Lyons suggested a budget planning committee going forward, to which Ioffe agreed, asserting that this budget did not have the same level of detail than the one approved for the 2018-2019 scholastic year.

Richardson concurred that the current budget should be broken down further for the sake of transparency.

” … I think having the historical data, as you said, was a little more detailed previously, I think maybe would be helpful so you could see where the money is going and how it’s going to assist the children,” he stated.

After the meeting ended, two parents from Jersey City Together, Dana Patton and Jessica Taube, applauded the board for approving a fully funded budget.

“We congratulate the board on final approval of this fully funded budget that brings our schools closer to a fair share of property taxes,” they said in a joint statement.

“Real work lies ahead. Jersey City Together will continue our work to ensure this money is invested so that our schools are fully staffed, that our children receive mental health supports, and that every school has potable water. Our children deserve schools that are fully funded, fully staffed, and fully safe.”