Jersey City voters may be asked to vote on another ballot question as advocates are pushing back in light of a recent ordinance that has placed restrictions on short-term rental units. 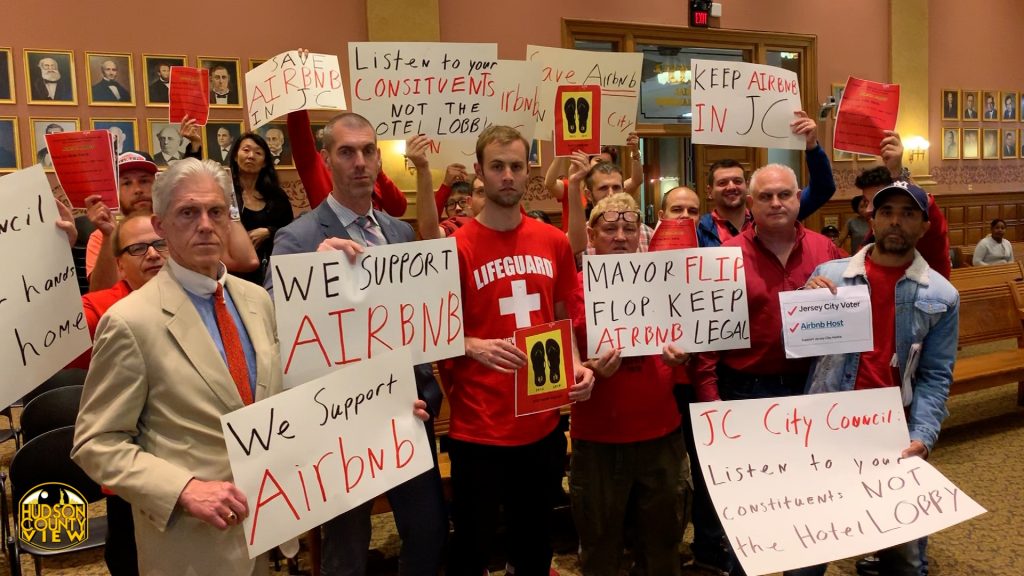 Last week, after almost nine hours of public comment from the short-term rental community at a special city council meeting, the governing body ultimately voted to restrict the number of buildings and units that current owners and renters can lease to Airbnb guests.

In response, Airbnb officials announced on a conference call today that they are launching a campaign to gather signatures so that voters will have the opportunity to vote on a ballot question in the next general election to decide whether to uphold or overturn the measure.

The company held the 10:30 a.m. media call along with three local Airbnb hosts who say that they will be working assiduously to gather the necessary signatures to overturn the ordinance that they say will limit their livelihoods and potentially even put them out of business.

Liz DeBold Fusco, Airbnb’s Northeast press secretary, started the call by mentioning that it was Jersey City Mayor Steven Fulop who enthusiastically welcomed Airbnb back in 2015.

“The mayor was quoted as saying then, ‘Should we be in the business of disallowing a service like Airbnb that people love and that lets middle class folks earn a bit of extra income by renting out their apartments? Absolutely not,'” said recalled.

“However, in a stark reversal Mayor Fulop and the city council introduced an ordinance in late April that could effectively end most of the short-term rental industry and the ability for local residents who rely on their property as their livelihoods.”

In response, Jersey City spokeswoman Kimberly Wallace-Scalcione said that the new ordinance preserves the original intent of what Airbnb was supposed to be when it was allowed to open for business in 2015.

In particular, she noted that there are still mechanisms to allow homeowners to supplement their income by renting a room or apartment in their home.

“The ordinance will address the problems created by out-of-control short-term rentals resulting in increased rent costs, decreased housing availability, and quality of life issues for our residents,” she stated.

“We listened to residents who expressed their serious concerns, and this ordinance creates permitting requirements for short-term rentals to fix those issues. In fact, this new ordinance was drafted by a working committee of Jersey City residents including renters and Airbnb users citywide.”

According to DeBold Fusco, Airbnb hosts and their supporters are already canvassing across the city to collect signatures.

They’ll have to meet the requirements of collecting signatures from at least 15 percent of the voters in the last municipal election, and then they will have to submit a petition to the city clerk’s office.

If they ares successful, the petition then moves to the city council and they will then decide whether they want to repeal the ordinance or place it on the November 5th ballot.

On the call, each of the three hosts explained their frustration with the council’s vote, which they feel was opaque and didn’t include input from the short-term rental community.

In May, the city council created an ad-hoc city committee for the explicit purpose of getting input from Airbnb hosts, but at least one Airbnb host feels this was a farce.

“The [ad hoc] committee was a fake, a cover for unilateral action as far as I’m concerned,” said Nadia Sexton, who rents a home she owns with her husband in the Bergen-Lafayette neighborhood.

“The council’s action has really been driven by anecdotes from the Downtown’s one percenters and the hotel lobby that wants to protect its $500 per night fees which are beyond the means of our family and friends if they want to come and visit us.”

“For the mayor and the council to turn around in a very opaque and non-transparent process is really unfair and undemocratic. I’m very frustrated because I just don’t see anything wrong with allowing people of less than the affluent to take advantage of what we have to offer,” Elkins said.

He lives in Ward E, which is represented by Councilman James Solomon, who was one the main sponsors of the ordinance, as well as a member of the ad-hoc council committee.

He said at a June 10 caucus meeting that many of his constituents have told him that they moved into Ward E to be part of a neighborhood, but not a neighborhood with unstaffed or understaffed buildings with Airbnb guests.

As far as Elkins is concerned, Solomon’s arguments are misleading.

“My own Councilman, James Solomon: I thought he was for good government. But he seems he’s making specious arguments to advance an agenda that really has no bearing in actual facts and data,” he claimed.

Speaking about the petition as a whole, Solomon told HCV said that he expects the referendum push to be an expensive one, but that won’t be enough to “bully” Jersey City into submission.

“I expected big tech and big developers to partner together to spend millions to bully Jersey City into placing their profits above the health of our communities. We won’t let it happen,” he exclaimed.

“I’m confident, should a referendum occur, the voters will choose lower rents and stronger neighborhoods.”

If the ordinance isn’t repealed, Airbnb says many short-term rental owners may have no choice but to sell their properties in an attempt to recover their investment, with some even expressing concerns that they may be at risk of foreclosure and bankruptcy.

Some of the other facts the company presented is that local residents made a total of $32 million by sharing their properties and that the company has generated $4 million in tax revenue in Jersey City.

When asked if there aren’t enough signatures collected to make it to the ballot, or if the ballot initiative fails, De Bold Fusco said they’re taking things one step at a time.

“Our hope is certainly that the people of Jersey City will want to come and support the short-term rental community that has been instrumental to Jersey City’s economy for the past four years,” she began.

“Again, this ordinance as written, will impose, severe restrictions on this community and will potentially end a great portion of the short-term rental community as it exists. That’s why they want to bring this issue to the people and why we are supporting them because this is an issue that will impact so many different corners of the community whether you are a host or not.”