In a rarely seen vote, the Jersey City Council passed a resolution supporting fair elections by abolishing the Hudson County Democratic Organization party line on ballots by a tally of 2-0(4). 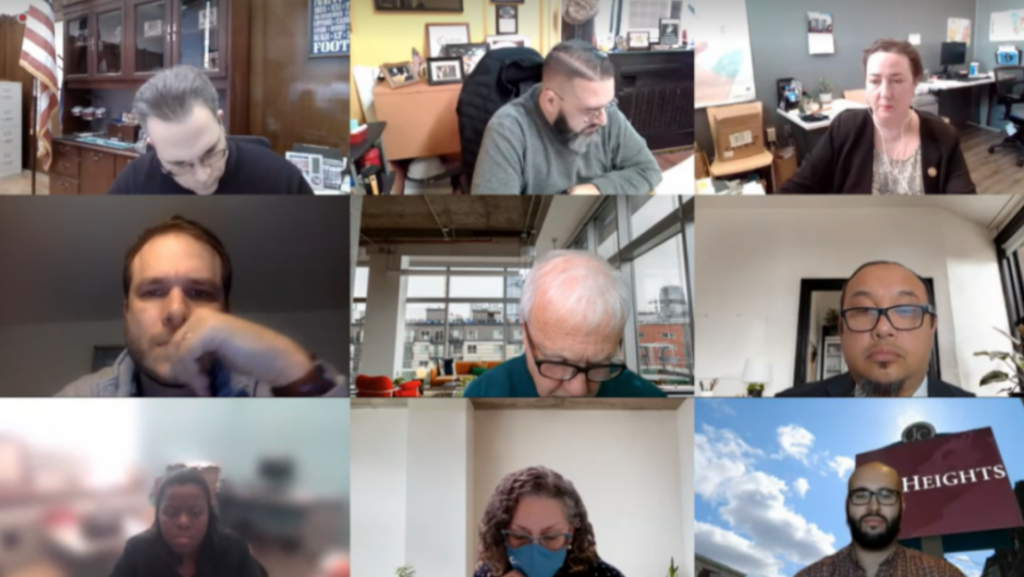 Ward E Councilman James Solomon, the sponsor of the measure, was joined by Councilman-at-Large Rolando Lavarro in voting yes.

“It is a big conversation. It is an extraordinarily important conversation as a state we simply have not had until the last year,” Solomon said prior to the vote.

Solomon also said that the current unwritten party rule in Hudson where mayors get to select their picks for offices such as state assembly and senate, without input from anyone else, are outdated and need to be updated.

Saleh acknowledged that it was very controversial that Bayonne Mayor Jimmy Davis announced Assembly Whip Nick Chiaravalloti (D-31) would be dumped from party line in the June 8th primary in favor of newcomer William Sampson IV.

Davis has yet to publicly explain why he choose to go in another direction, even after consulting with top elected leaders in the state including U.S. Senator Bob Menendez (D-NJ) and Gov. Phil Murphy (D).

Saleh justified his abstention since he knows Chiaravalloti personally and has attended fundraisers for him in the past.

“We can continue this conversation: What is the line going to be replaced with? We can entertain conversations. We as a community can have these conversations,” he said.

“I’ve also talked to clerks at the municipal and county level about some potential inadvertent consequences of changing the way our ballots are raised. I think we need to have this conversation,” Prinz-Arey added before abstaining, noting that these concerns could be addressed at a committee people.

Boggiano said that he had asked questions about the resolution prior to the meeting and hadn’t received answers, and for that reason, could not support it.

“I’ve spoken to several people. Certain people didn’t get back to me. I think it should be pulled, to be honest with you,” Boggiano said before abstaining.

Hector Oseguera, of the Progressive Democrats of Hudson County, was one of many who spoke in favor of the resolution.

“End the HCDO endorsement process. You should be beholden to the people, not the political bosses … It is not a democratic process. It’s not right in a democracy to have a system where an unelected official determines who and who will not serve in government.”

He also noted the controversy in Bayonne shows that mayors have “arbitrary and capricious power” in Hudson County.

Gary Spingarn, of the Hudson County Progressive Alliance, said “the line continues to damage our community,” calling the situation in the neighboring Peninsula City “a failure in the electoral process.”

Yet another member of the HCPA, Marc Devens, noted that U.S. Senator Bob Menendez (D-NJ), implemented the unofficial mayor’s choice rule nearly two decades ago when he was the HCDO chair to emphasize that times have changed since then.

“This resolution is exceedingly important because New Jersey has the most corrupt ballot design in the country. And that is not hyperbole,” added Imani Oakley.

“Not only is it an insult to democracy, it is a severe inhibitor to voters who want representatives who don’t cave to developers, who don’t call the police on them when protesting ICE, don’t partner with those who are well-connected.”

The resolution is non-binding and therefore has no implications on upcoming elections.

Last week, a few dozen Hudson County Democratic committee members signed a letter to HCDO Chair Amy DeGise – who is running for council-at-large on Mayor Steven Fulop’s ticket – asking to call a special meeting to discuss getting rid of the line.

As of Thursday morning, she had not responded to that request.

On an unrelated matter, extending the city’s rent freeze passed unanimously (6-0) but still managed to stir up some controversy.

“Am I a lesser citizen compared to those who are tenants? This is nothing but socialism to its core,” resident Yvonne Balcer said.

“You are seizing our property so another group of people can have cheap housing. I think it’s immoral.”

On the other side of the argument were activists like Eleana Little, a member of the HCPA and NJ-08 for Progress.

“To abandon our most vulnerable residents in this time and exacerbate this problem would be a moral failure of the city.”

Additionally, James Ambrosio, a landlord in the city, explained why he opposed another extension after supporting the same measure earlier in the pandemic.

“I believe some of those funds should be allocated to landlords,” he said regarding stimulus money.

“If this moratorium is allowed to continue, I believe landlords should be reimbursed by the city for rent increases not being given,” Ambrosio said. He also said the money could also be deducted from property taxes.

Jersey City Property Owners Association Executive Director Ron Simoncini claimed a survey done by the Liberty Board of Realtors found many “people are walking out of their homes in uniform to go drive a bus and they’re not paying their rent because there’s no threat of eviction.”

However, he noted people must pay all their back rent within three years.

Still, the council did not appear to be swayed.

“Based on a number of calls I’ve received into my office in the last year, there is a need for this,” said Prinz-Arey.

Boggiano said he’d support one more extension, the fourth of its kind, but said he wouldn’t be as generous if there’s a next time.

“This has to end. I mean, I’ll vote for it this time, but that’s it. We have to start considering the people who own homes here and start helping other people in this city also,” he explained.

“It has gotten to the point where it’s out of hand. I’m getting calls from people who rented apartments, and they stayed there eight or nine months, and they’re splitting.”

Additionally, measures to establish the Arts and Culture and Open Space Trust Funds passed on first reading without council discussion, as did the first reading of an ordinance on affordable housing compliance.