Bayonne mayoral hopeful Jason O’Donnell is taking aim at incumbent over Mayor Jimmy Davis over a 2014 campaign promise to put “an end to unnecessary 30 year tax abatements that the homeowners have paid for.”Â 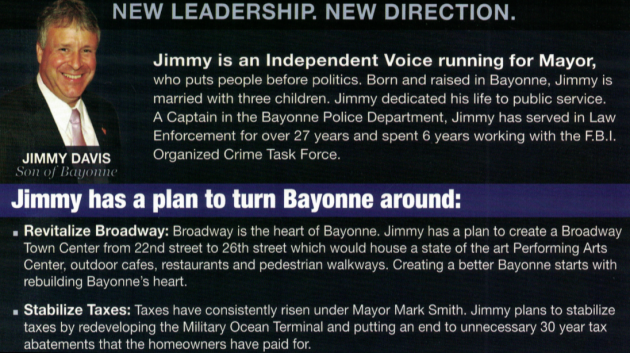 â€œMayor Jimmy Davis, Juan Perez and the rest of their Council Team have already proved they will say anything to win an election,â€ Oâ€™Donnell said in a statement.

â€œJimmyâ€™s Team worked to convince people four years ago they wanted to lower taxes and get rid of abatements right before they won and started handing out those tax breaks for wealthy out of town developers. In between the tax giveaways, and the taxpayer funded settlements, our friends and neighbors will all be paying The Jimmy Davis Tax for generations.â€

O’Donnell also pointed to a 2014 interview with then-council candidate Perez said “people should pay their fair share” instead of getting 30-year tax breaks that burden senior citizens and other residents.

“Mayor Davis would like to thank the O’Donnell campaign for pointing out that he’s kept his promises to revitalize Broadway, stabilize taxes and finally get MOTBY redevelopment moving, which is exactly why Bayonne residents are going to vote to re-elect the Davis Team in May,” he said in an email.

“The fact is that Mayor Davis’ economic development agenda is revitalizing Bayonne and the proof is everywhere you look, from the $2.5 billion in new investment coming to the city to the $10 million in new tax revenue, to the thousands of jobs being created and sharp increases in property values. No amount of spin from the O’Donnell campaign can change these facts, and Bayonne residents aren’t going to be fooled by his negative attacks.”

Swibinski also pointed out that the mailer was sent by an independent committee, the Committee for Economic Growth and Social Justice, so Team Davis had no control over the content.

Technically, Davis and Perez haven’t changed their stance from four years ago since the current administration hasn’t approved a single tax abatement.

However, they have approved 40 payment in lieu of taxes (PILOT) agreements.

This topic is nothing new in the Peninsula City, as O’Donnell and his running mates have often taken aim at their opponents over “giving tax breaks to wealthy developers.”

Editor’s Note: This story has been updated with a comment from the Davis campaign.