Hundreds, possibly over a thousand people according to first-hand accounts, waited outside of the Hoboken Elks Club from 2 a.m. until 4 p.m. Wednesday, October 22nd, in hopes to obtain an application for Section 8 Housing Choice Voucher Program in Hoboken and Weehawken. 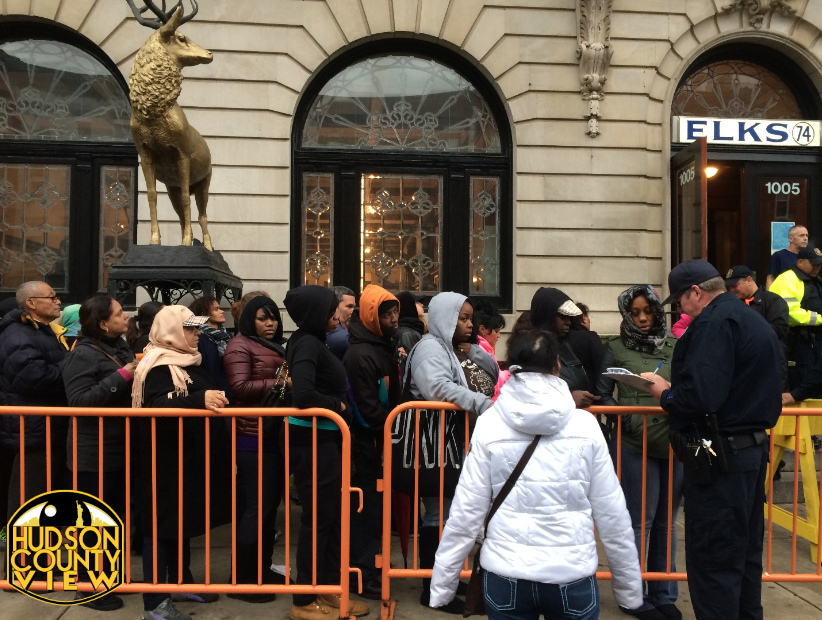 By Katherine Guest and Michael Shurin

The line began on 1005 Washington Street, went around the block towards 11st street–then alongside Hudson St. and back around towards Maxwell’s Tavern on 1039 Washington St.

According to one man in line, who chose to give only his first name – Malik, the line consisted of four columns instead of one single line which caused a disorganized process.

After 4 p.m., when the office was closed, a police officer asked those who were in line to have their name and phone number written down for identification purposes which “may or may not work to [their] advantage,” he said.

While raindrops descended, and the cold breeze masked disappointed faces, one disabled woman hid behind laughter while referring to her life as “a horrible one.”

“I’m on disability and now I’m 56, alone without anyone. I’ve been contributing to society since 1976 until August 2013 when I was laid off. I’m frightened, I don’t know where to go since time is of the essence and I’m fighting against time. I’ve been here since early on and I never got to the finish line,” said Ms. Lopez, who chose to not divulge her first name to Hudson County View.

“It’s tough out here with applied affordable housing and I’m sure there are a lot of people in this predicament. Everyone deserves a fair share of people’s tax dollars and not only just a helping hand for upper middle class citizens.”

According to Lopez and those with disabilities waiting in line with her, the Applied Housing Management Co. office phone was unreachable due to periodic busy signals.

The Hoboken Housing Authority has not accepted waiting list applications since 2004 from low- or moderate- income households that make an income below 50% of average family units. For example, at a moderate level in Region 1, a one person household cannot make more than $46,635 a year.

Furthermore, the sign indicated that the housing available was for one-, two- or three-bedroom apartments.

Margarite Quispilaya, divorced with six children, who is on SSI with a spinal injury from a car accident, couldn’t hold back her tears when explaining her tragic story:

“Hey, it’s a bad day and as you can see, once again, I’m over here trying to put my name in for Section 8. I put my name in the Housing Authority in Union City on 36th and Kennedy Blvd. and they haven’t called me since 1990. And yes I did bring this attention to the Mayor, but I’ve yet to gain help.”

On November 5th, on 120 26th street in North Bergen, Applied Housing will have applications for those who were unable to receive one yesterday and will accept applications up until Nov. 19th.

Editor’s Note: Katherine Guest compiled the text for this story, while Michael Shurin edited the video.