Last night, hundreds of Jersey City locals gathered in solidarity and in prayer at Temple Beth-El to mourn the victims of Tuesday’s horrific active shooting incident that killed a police officer and the occupants of a kosher deli on Martin Luther King Dr., devastating the Greenville neighborhood’s Jewish community and the region at large. 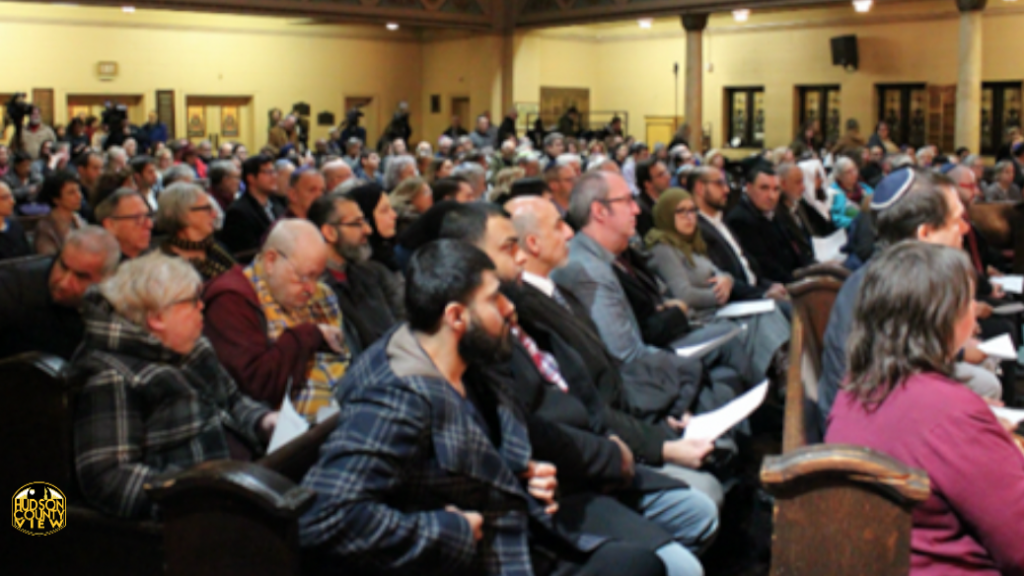 The service was heavily guarded by dozens of police officers from the Jersey City Police Department and Hudson County Sheriff’s Office, who surrounded the temple on all sides and indoors.

Local officials, religious leaders, and community members joined as one to memorialize all five victims who were killed by shooters David Anderson and Francine Graham: Jersey City PD Detective Joseph Seals, and four civilians; Leah Mindel Ferencz; Moshe Deutsch; Miguel Douglas; and an unidentified survivor who was able to escape the building and is in recovery.

Ferencz co-owned the kosher deli with her surviving husband. Deutsch, a rabbinical student from Brooklyn, was visiting the deli at the time of the incident, while Douglas was an employee at the deli.

Rabbi Leana Morrit led the evening’s services. A score of other religious leaders and public officials also spoke at the event. Countless priests, imams, pastors, and rabbis of a patchwork of denominations led the gathering in prayers and songs.

She and other speakers dwelled on an ancient Jewish precept to stress the unity of the human race, and the efforts made by first responders who went into harmâ€™s way to stop the violence.

“Actions speak louder than words. If we stand together as one perfect community, one Jersey City, and one state, we are sending a powerful message to those forces that try to divide us, stoke fear in our communities and young people, and those that want to do us harm.”

“It’s important that we don’t let any of this become normalized. Our law enforcement partners are working diligently to answer every question that every one of you has about why this happened, and we will not rest until we share the answer to every single question with every one of you,” Grewal said.

Jersey City Mayor Steven Fulop expressed sentiment that Jersey City must heal together as one. Hours before the service, he publicly expressed his adamant and widely-shared belief that there was no question the attack was a hate crime motivated by anti-Semitism and that it should be called out aggressively for what it is.

“In all my time in public service, and even in the military, I’ve never seen anything like yesterday. We’ve been in several situations and gathered with the Sikh community, the Muslim Community, and the LGBTQ community, and here we are gathering for the Jewish community,” the mayor explained.

“Every time, we gather in large numbers, speaking to our diversity which is one of the greatest strengths we have. We not only welcome the Orthodox community, but appreciate that they are here.”

Dani Dayan, an ambassador to the Israeli Consul General, shared his concerns with residents about the recent rise in violent crimes committed against Jews both globally and in the United States, including the recent shooting at Tree of Life Synagogue in Pittsburgh.

“I remember giving remarks during the memorial for an octogenarian holocaust survivor who was murdered in her apartment in Paris and I was shocked when I realized that 11 Jews were murdered in the last decade in France by anti-Semites,” Dayan stated.

“Yet here we are, over a year and a half since then, burying 14 more Jews killed by anti-Semites in the United States. We have the experience of horrendous history, and we know what happens if we don’t erase anti-Semitism and racism from the earth immediately after it happens. Later, it could become too late.”

“We’ve seen too much hate in this country and in New Jersey. What I see now is a normalization of hate and anti-semitism, we are dealing with almost one anti-semitic incident per day,” Bernstein said.

“This was a targeted anti-Semitic attack where Jews were intentionally murdered, marking the third recent incident of its kind on American soil. This cannot become normalized.”

According to New Jersey Israel Commission’s Andrew Gross, the rebuilding process has already begun in the area destroyed by gunfire.

“We saw broken glass, bullet holes, and the books of school children who dropped them while hiding in their classrooms,” Gross said.

“Despite the horrendous nature of these murders, we saw the owners and people outside of JC Kosher already rebuilding. Employees and community members were already there hammering nails into walls and restoring normalcy to the community, because we cannot be controlled by fear.”

As the service went on, thousands of mourners, most of whom were members of the Orthodox community, congregated in the streets outside of different synagogues in both Jersey City and Brooklyn where Deutsch’s and Ferencz’s funerals were taking place, sobbing in the cold as eulogies were conducted.