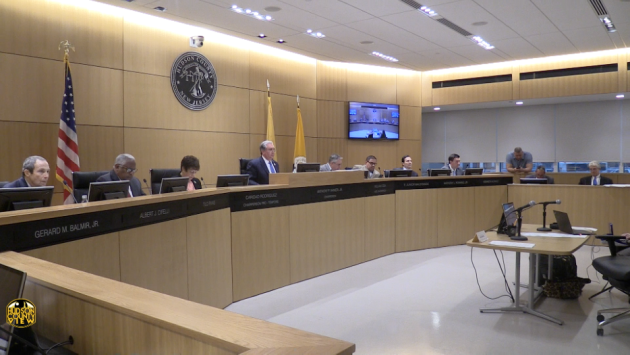 Both measures were essentially an after thought and passed unanimously (9-0) as part of the consent agenda, which contained 28 other items.

Kenny, a close advisor of Hoboken Mayor Dawn Zimmer, is a partner in the firm along with Ed Florio, who typically sits in on the Hudson freeholder meeting, and Nita Raval.

Board Chairman Anthony Vainieri (D-8) confirmed with Hudson County View that he had the agenda items removed prior to last Tuesday’s caucus meeting, but stressed that he only wanted to make one change in order to keep a closer eye on the county’s legal bills.

“Four times a year, the firm will now be subject to a review with our contracts committee, keeping us informed about what is being litigated,” Vainieri said, noting that was the only provision he wanted added to the contract before it was voted on.

Freeholder Bill O’Dea also stated that he shared Vainieri’s concern and believed that the added discussion was simply business as usual.

Florio, Kenny & Raval has also been the law firm of choice for the Hudson County Board of Freeholders for nearly two decades now, so it is nothing new for them to receive a six-figure contract – regardless of what the current political climate is like.

Despite those facts, some outsiders looking in are insistent that there is more than what scrapes the surface on this one.

Allies close to Sacco believe that at a private dinner between many of the county’s top politicos last month, Kenny openly made it known he wants to be the next chairman of the Hudson County Democratic Organization – a position he held nearly a decade ago.

That elected post is currently held by Assembly Speaker Vincent Prieto, one of Sacco’s most notable and reliable allies in the state Legislature.

However, according to others who sat in on the Hoboken hosted meeting, the discussion had less to do with the HCDO chair and/or Sacco and more to do with discontent centered around top-tier Sacco operative Joey Muniz.

Although published reports have tied Sacco acolytes in with Hoboken 1st Ward Councilman Mike DeFusco’s seemingly inevitable mayoral run, North Bergen sources have denied that such speculation has any validity.

DeFusco, who was narrowly Hoboken’s top fundraiser in the first quarter of 2017, is yet to announce his candidacy but he is expected to formally challenge Zimmer before the end of the month.