Despite over nine hours of public opposition, with nearly 200 speakers vocalizing concerns, the Hudson County Board of Chosen Freeholders again voted to renew their contract with U.S. Immigration and Customs Enforcement (ICE). 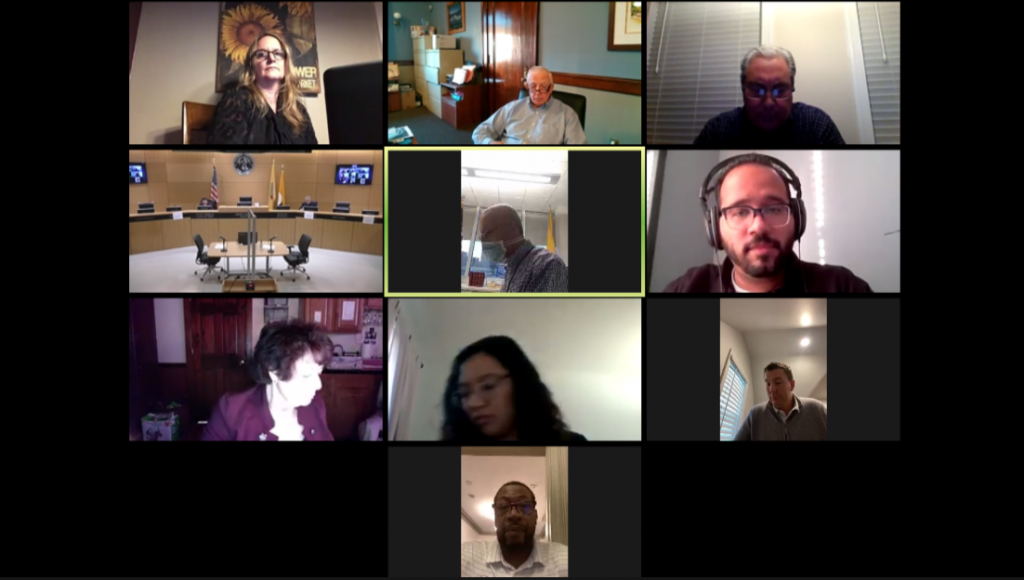 “Whether your ancestors came to this country through Ellis Island or Newark Airport, they were looking for a better life … This contract is something that stains the reputation of Hudson County,” said Union City resident Hector Oseguera.

Dozens of community groups such as the North Hudson Democratic Socialists of America, Solidarity Jersey City, the Hudson County Progressive Alliance – along with religious groups such as Faith in New Jersey – threw haymakers at their county leaders for hours on end, with some help from a few municipal elected leaders.

“This is country that has a proud history of immigrants. A lot of the freeholders are part of that history,” exclaimed 5th Ward Councilman Phil Cohen.

” … The economic impact of this given the size and scope of this budget is not that significant.”

Prior to the next speaker, Jersey City Freeholder Bill O’Dea (D-2) addressed what officials referred to as a “memo” from Hudson County Executive Tom DeGise’s office that listed all the offenses the current detainees had allegedly committed – ranging from homicide and robbery to “immigration” and illegal entry.

“In 95 percent of those cases, those individuals have already paid their debt to society,” O’Dea said, expressing frustration with the “misleading” nature of the memo.

“Support for ICE via contracts such as this one harms our communities and undermines our values – I say this as a mother, as a social worker, and as a fellow elected official,” added Hoboken Councilwoman-at-Large Emily Jabbour.

County officials said that there are now 93 detainees at the jail, up from 79 since their November 12th meeting. Heading into that meeting, their agreement with ICE netted the county $120 per day, per detainee.

Based on that figure, that would net the county about $4 million on an annual basis – a small fraction of their $725 million approved budget this year – though DeGise’s office said they are on track to earn about $8 million off the ICE contract in 2020.

“We can’t repeat the errors of the past. In the past four years, Trump has transformed ICE into an institution that furthers a racist agenda … Change won’t come overnight,” said Jersey City Councilman-at-Large Rolando Lavarro.

“Any agreement with ICE is going to put us in an unethical and immoral place. By extension, the county and everyone living in it is profiting off the detention of human beings,” asserted Ward E Councilman James Solomon.

Solomon and Lavarro were two of the five Jersey City council members who came out against the ICE contract last night.

From there, residents/activists were happy to take the baton and continue to blast a potential new deal with ICE, which gives DeGise the ability to negotiate the final terms of the contract for “the longest period of time allowed by law.”

The time frame can last up to 10 years, the resolution says.

“It’s absolutely shameful that would renew a contract with an institution that is responsible … for a history of medical neglect and abuse and forced sterilization of women,” stated Jamie San Andres.

“ICE is a terrorist organization … ICE represents the worst of us, it does not bring security, it damages communities … it forces trauma,” said Suddip Bhattacharya.

Freeholder Al Cifelli (D-9), who represents West Hudson – including Kearny where the county jail is located – said he had heard little financial details as to what the new ICE contract would bring to the table, but that wouldn’t have impacted his decision any way.

“I am not overly concerned whether the county makes or loses money. My concern is the well being of the 70-plus detainees,” he explained.

“I don’t know what the finances are. I’ve spoke with people at the county and the answers weren’t overly detailed.”

Cifelli asked nearly every lawyer, public defender, or legal expert that voiced their opinion how getting out of the ICE contract will help the detainees, citing the Lawyers for the New York Immigrant Family Unity Project neutral stance on the issue after being for it in 2018.

Additionally, Immigrant Rights Clinic Co-Director Alina Das said holding beds open at the jail is “an invitation to ICE” to fill them and justify their detention budget.

Jose Miranda, of Catholic Migration Services, recalled stories about two clients detained in Hudson County, one who he identified as Richie “developed chronic medical conditions” despite not having any health ailments prior to being detained.

He was detained after being charged with driving under the influence, Miranda said.

At roughly 5:40 p.m., after well over 100 speakers had addressed the board, Freeholder Chair Anthony Vainieri (D-8) asked County Counsel Ed Florio if it would be permissible to cap public comment at the number of people with their hands raised on Zoom.

Florio said it would be legal since the New Jersey Open Public Meetings Act calls for public comment to be heard at length and the board can move forward once it is clear that burden is met.

After a technical error, the board determined that 62 more speakers had signed up to speak at that time.

“This country, this county embraced me and my family and gave us an opportunity to live, prosper, get educated, and serve our community as we’re doing …  [But] there has to be law and order,” she said.

“No one here has mentioned instances of undocumented people committing any crimes. They’re all saints and they’re all persecuted? Yes, I vote for the ICE contract because I don’t know how much better it would be from them somewhere else.”

Gabriela Rodriguez, a DACA recipient, broke down in tears during her remarks after she was chided for questioning the timing of the meeting, but continued on.

“Keep laughing at me if you like to. The folks I know, because they are family, co-workers, and community members, suffer from sexual abuse, malnutrition, and have their human rights violated at these ICE detention centers,” she exclaimed.

Furthermore, one of Rodriguez’s constituents, Caitlin Sherman, a member of NJ-08 for Progress, said the freeholders should’ve gotten their finances in order months ago and now needs to listen to the will of the people

“ … You’ve had two years to figure this out. Get our county of the detention business. It’s pretty clear this is what your constituents want you to do and you work for us,” Sherman said.

“My dad, that was his biggest fear: getting thrown into jail and deported to Ecuador … Other people’s fear is even bigger: their jobs are at stake, their livelihoods … No one leaves their country of origin just because – you need a really strong reason,” exclaimed Hoboken’s Rob Bautista.

“You all choose to have human beings be treated so inhumane by ICE … Those of you that believe in a higher power have a lot to answer to for ICE,” said Aissa Catherine Heath.

“ICE is a rogue, racist, organization. They sweep up black and brown people that look like immigrants … They make arbitrary decisions about who will be detained: they act with impunity, accountable to no one,” stated Susan Goodman.

Finally, at 10:14 p.m., the public comment session came to a close, where not a single person spoke in favor of the contract, and the freeholders began deliberating.

O’Dea called this issue the “civil rights movement of 2020,” later stating that detainees are treated differently than everyone else at the jail simply due to their immigration status.

“That’s the reality of how this is a civil rights movement in 2020. And that case has been made to me through nine hours of testimony … I don’t think that when you come to a civil rights issue, that dollars really matter.”

He also called it “bs” that corrections officers would be laid off if the contract was voted down, noting that the county had never done that before.

Rodriguez expressed sympathy for the detainees but noted “safety is a priority for me and my family” before voting yes.

“The mass incarceration of undocumented immigrants has real world consequences on our communities, including loss of incomes,” Cedeno said.

Meanwhile, Torres said he paid “the ultimate political price” after voting no last time, ultimately being thrown off the Hudson County Democratic Organization line this year, but said he felt it was worth it before voting no again.

However, the vote was 4-3 at that point since Cifelli, along with Freeholders Anthony (D-5) Romano and Kenny Kopacz (D-1), voted in the affirmative.

Ultimately the resolution passed 6-3, with Vainieri and Freeholder Jerry Walker (D-3) also voting yes after over 10 hours of comment and deliberations on the matter.

LETTER: Bayonne BOE trustees should not be publicly promoting drug use