The Hudson County Board of Chosen Freeholders endured over four hours of public comment at last night’s meeting urging them not to renew their agreement with U.S. Immigration and Customs Enforcement (ICE) – despite the contract not being on the agenda. 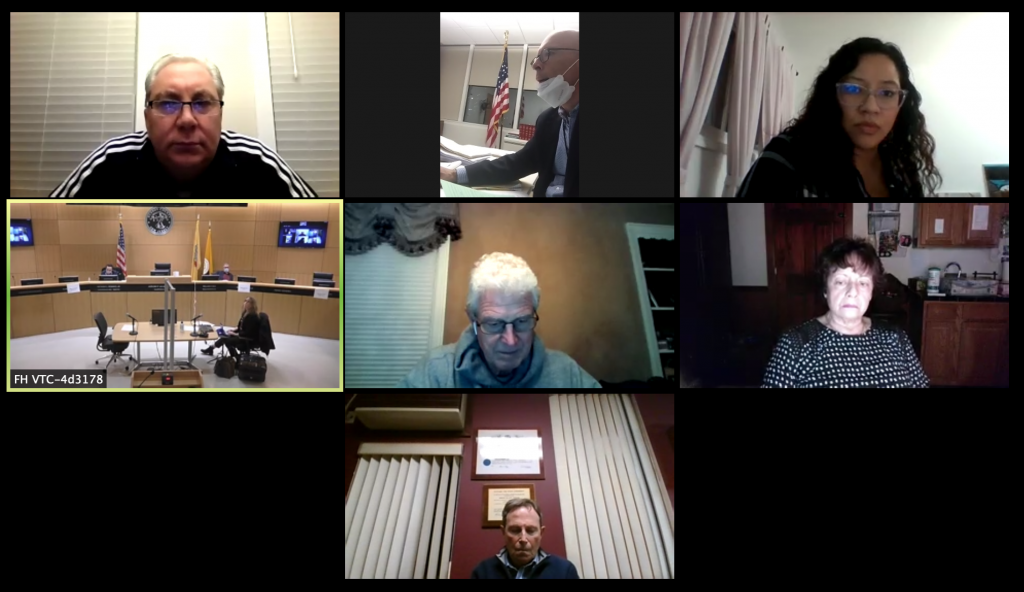 The freeholders renewed their deal with ICE, which has existed in some form since 1996 and allows them to earn $120 per day for each detainee housed at the county correctional facility in Kearny, two years ago.

Shortly thereafter, Hudson County Executive Tom DeGise said that they would implement a plan to “phase out” the ICE deal by the time the contract expired in 2020.

However, DeGise told HCV earlier this month that he was confident Joe Biden would win the presidency and that “we’ll have somebody that we can talk to” to discuss the next steps with the federal law enforcement agency.

Prior the public comment portion of the meeting, a few of the county elected leaders said their piece about what should come next.

“We don’t have a contract directly in front of us …  I’m not saying I’m for it or against it, but it’s not on the agenda,” Board Chair Anthony Vainieri (D-8) said prior to the portion of the meeting set aside for public comment.

Vainieri excused himself from the meeting around 7 p.m., an hour after it started, indicating he had previously committed to attending a community event in North Bergen.

Freeholder Anthony Romano (D-5), who represents Hoboken and about half of the Jersey City Heights, seemed to be leaning towards supporting continuing the county’s deal wth ICE.

“If there is no contract, that doesn’t mean the door is open. They get put into other facilities,” he began, also calling it “inappropriate” to continue to refer to the jail as a torture facility.

“I feel that the corrections officer show a lot of empathy … it’s just not fair to those who work there … We just can’t close a jail: there’s people in there convicted of crimes.”

Jersey City Freeholder Bill O’Dea (D-2) reiterated that he still doesn’t support the contract and would vote against it if it makes an agenda, as he did in 2018, though added that he tends to agree with Romano that the conditions at the jail have made strides in recent years.

“The amount of reforms and initiatives that have occurred there in the past three or four years speak for themselves … the bottom line is a lot of positive things have happened at that facility,” he stated.

“You can be against it philosophically, but that doesn’t mean you have to castigate against it.”

“The advocates, the attorneys for the detainees have uniformly said that they do not want us to shut the doors because if we do, that doesn’t mean that the detainees walk out and go back to their homes in Manhattan or Hudson County,” he began.

” … Unfortunately the detainees would be taken by the federal authorities which would alienate them not just from their families, from their legal system. Does that mean it’s a great system: absolutely not. I think last Tuesday’s [presidential] election will be a tipping point in the entire program.”

After about 30 minutes of house keeping matters and public comment on unrelated topics, around 100 activists spoke out firmly against partnering with ICE.

” … I know this county is crooked but to be this flagrant is just unacceptable. We’re addressing material conditions: our tax money goes to this torture facility … you don’t even protect the employees who died. We call it a concentration camp because that’s what it is,” said Jesse Rosso, a Hoboken resident.

“This isn’t a philosophical exercise: there’s immense human suffering behind those doors … You’re all culpable for perpetuating the political economy of incarceration,” added Mariam Zein, a member of Solidarity Jersey City.

Dozens of other speakers expressed similar points of view describing inhumane conditions at the jail, which were clearly irking Romano, who walked out while Jay Arena – an anti-ICE activist that unsuccessfully ran for Essex County executive in 2018 – was speaking.

“Joe Biden was the vice president of Barack Obama who was known as the ‘deporter in chief’ … playing the same role essentially that the Trump administration is playing … You need to break the blood money contract,” Arena said, before referring to the jail as “a concentration camp.”

Romano, who attended the meeting in person, re-entered the freeholder chambers once Arena was done speaking, though those calling in were far from finished.

” … You act like ICE are the saviors of the community: they’re not, they’re Nazis!,” exclaimed Kason Little, who identified as a member of the New Jersey Hellraisers.

“ICE is a disgrace, it’s clearly a human rights violation. I want you guys to think if you want your names next to things like Auschwitz,” said Union City resident Hector Oseguera.

” … It’s not just about this facility: it’s about allowing us to enter into an agreement with this morally bankrupt organization known as ICE,” said Marc Devens, a member of both Solidarity JC and the Hudson County Progressive Alliance.

Furthermore, at least four detainees had their experiences read into the record by activists detailing blood, feces, and urine on the walls, little food selection, non-functioning showers, and/or toilets, and being placed in solitary confinement for no good reason.

Cifelli and O’Dea both tried to ascertain whether or not these detainees had these experiences in Hudson County, which appeared to be the case in all but one instance.

Just before the meeting ended, Hudson County Correctional Facility Director Ron Edwards said that there are currently 79 detainees at the jail, all of whom are men from New York, following questioning from O’Dea.

The board finally adjourned just before 11 p.m. and took no formal action on the ICE contract.

The five-hour meeting can be viewed in it’s entirety below: