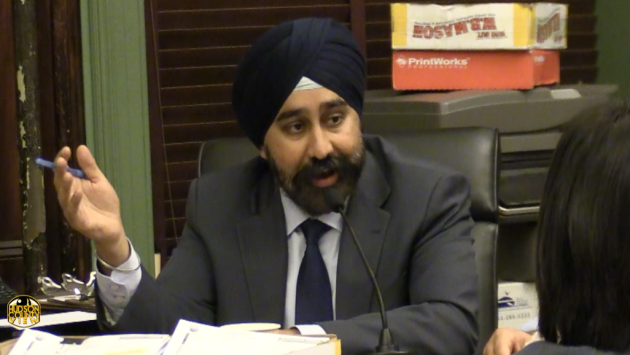 By John Heinis/Hudson County View
AÂ copy of the agreement, which was released by the mayor’s office,Â between Bhalla and the high-powered law firm Lavery, Selvaggi, Abromitis & Cohen, D.C., dated February 16th, says that the Hoboken mayor will focus on providing “advisory services in the firm,” particularly “mentoring young attorneys.”

Specifically, the deal says Bhalla will be compensated at $60,000 a year without any benefits or a 401k option, though the firm offers to cover documented expenses that are “reasonable and related” to the of counsel position.

Additionally, if the Mile Square City Mayor refers new clients to the firm, he will receive “20 percent of all gross revenue paid by clients in excess of $60,000 up toÂ $750,000,” while no additional compensation will be offered for the first $60,000 in revenue.

For new clients that generate over $750,000 in revenue, Bhalla will earn a 15 percent commission.

The contract does not state anything about capping his earning potential for referrals.

Also of note, the contract says the firm, which has offices in Morristown and Hackettstown, will be in communication with Hoboken Corporation Counsel Brian Aloia “identify and address” any potential conflicts of interest.

“These limited engagements in no way interfere with my full-time commitment to the City of Hoboken. I am often the first one to arrive in the office and the last one to leave. I assure you that will not change,” Bhalla said in a statement.

“While I am proud of what we have accomplished in 6 short weeks, we could get so much more done with a Council that worked cooperatively with me to move Hoboken forward. It is now more than 3 months since the November election. It is time to put it behind us and work for the best interests of the City we all love. I know if we do so, Hobokenâ€™s best days are yet to come.â€

Bhalla also cited the recent $1 million grant from the New Jersey Department of Transportation, an AA+ bond rating for the city and fighting the Gov. Chris Christie (R) administration on the Union Dry Dock proposal as early political victories since he took office.

On Wednesday, the Hoboken City Council passed a measure by a vote of 7-2 asking Bhalla to answer 26 questions about his new employment.

“This letter shows that exactly what we feared about Mayor Bhalla’s second job is true, that its real purpose is not to mentor young lawyers, but about developing new business for a politically-connected law firm and being highly compensated for it,” DeFusco said in a text message.

“It also makes it clear that the only arbiter of whether or not this second job creates a conflict of interest will be Hoboken’s Corporation Counsel, someone who donated to Mayor Bhalla’s campaign and serves at his pleasure. That is not the kind of oversight the residents of Hoboken deserve — it’s the ethical Wild West.”

DeFusco also called on Bhalla to answer all 26 questions asked of him by the council.