The Hoboken City Council passed an ordinance imposing a 12-month wait before medical cannabis dispensaries can expand sales, as well as approving a the first reading to expand their cannabis review board to seven members after voting it down at their last meeting. 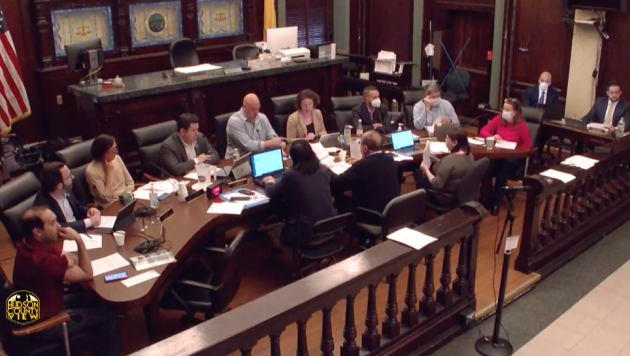 5th Ward Councilman Phil Cohen said he sponsored the ordinance to update the city’s law to bring it in line with the NJ Cannabis Regulatory Commission’s policy.

“I’m really aggravated about the piecemeal process since this started,” Mary Ondrejka said about the adult-use cannabis legalization process.

“We’re working backwards. You got applications in violation, yet you listen to them. What is being clarified here? I’m still confused: what is legal? Anybody applying before the 28th of April, it doesn’t really matter,” she added, criticizing the process of grandfathering.

Ondrejka also said that the location of Harmony Foundation, 95 Hudson St., is in a state of disrepair with “bird s*** all over it” and therefore shouldn’t be expected to open any time soon.

“The medicinal cannabis dispensary has to wait one year before transiting to a recreational facility. They can open as a medical facility tomorrow. Terrapin actually asked for the early shift, and that was tabled,” Council President Michael Russo, who is also the chair of the cannabis review board, said.

“I think a lot of the cannabis changes… are not necessary but window dressing because those applications were in well before.”

2nd Ward Councilwoman Tiffanie Fisher, who has been outspoken against the Story Dispensary in her neighborhood, said the dispensaries insisted they would only sell medical cannabis when they had plans to sell recreational cannabis.

“Now we’re just adding two giant dispensaries into the mix down there and what this does is it removes that restriction and it basically says ‘we’re just gonna waive it, every other dispensary in Hoboken has to be 500 feet from another one, but you two don’t,'” she argued, referencing the “common sense” cannabis reforms they approved last month.

She also expressed dismay that Russo and CRB Attorney Ron Mondello have advocating for grandfathering in this matter.

“If we vote no on this, we will have four retail. Our original ordinance was three and somehow got changed. I do wish we could step back,” 6th Ward Councilwoman Jen Giattino added, suggesting freezing the process for six months.

“This was completely rushed,” Giattino added to applause from the crowd. “I was told that [freezing] would be illegal. Corporation Counsel, explain the reason for it.”

“I believe you were sent a legal opinion,” Corporation Counsel Brian Aloia said.

“Can you just explain it to the public?” Giattino requested

“No, I’m not going to give a legal opinion to the public, but thank you,” Aloia responded.

“We can either opt-in or opt-out but there’s nothing in the law to say ‘take a break.’ I don’t understand why we can’t,” the councilwoman continued.

Councilman-at-Large Joe Quintero agreed with Russo that this was all window dressing, noting that the city has granted 146 liquor licenses and that he feels “alcohol is far more dangerous than cannabis.”

1st Ward Councilman Mike DeFusco said that while he supports medical and recreational cannabis, he feels the process was rushed, which is why they are still discussing it a year later.

“There were going to be three dispensaries. They were in redevelopment areas. I made a mistake supporting Council President Russo’s changes to the ordinance last summer. There are major, major, major financial contributions being made to this council and to the mayor. I find it really disheartening. I wish I could take a step back, ” he said to applause from the crowd.

4th Ward Councilman Ruben Ramos concurred, stating repeatedly that it was okay to admit they made a mistake last summer.

As is often the case these days, Russo responded to Fisher in kind.

“No member of the Cannabis Review Board asked to grandfather in any application. That came from our attorney, not only the board’s attorney, the city’s attorney. We have council members who make statements that are misinformation,” he began.

“I remember specifically Councilwoman Fisher came back and said, ‘I want to make sure the I-W district is not in the zone.’ We actually made that change on the fly, and inadvertently the councilwoman removed the entire district from the city. We had to come back at the next meeting and vote on it again. Every single councilperson voted for that. To pretend a change in law will change something that already happened is misinformation.”

The second reading of the ordinance passed 5-4, with DeFusco, Fisher, Giattino, and Ramos voting no.

The council rejected it at their May 4th meeting with Russo and Councilwoman-at-Large Emily Jabbour claiming that Fisher, who sponsored the local legislation with Giattino, did not follow the proper protocols to place the item on the agenda.

None of the council explained their vote this time around, though a few members of the public voiced their opinion on the matter.

“From my understanding, the cannabis review board is the first step if someone wants to open a dispensary in Hoboken … I’m a little uncomfortable that while I’m sitting there watching the people on the board … that I’m looking at three white men,” said resident Nicole Magana.

“I’m a second generation Mexican-Cuban American, and I support cannabis, but I don’t see women on the board, I don’t see people of color on the review board. And all the social injustice that has happened with cannabis over the last three, four decades, in the roll out here it was really important to give people of color a face and support … I do think we should have a more diverse cannabis review board.”