Hoboken and CarePoint Health officials hosted a press conference in front of their local hospital this afternoon to make an urgent plea for 13 ventilators: “this is literally a matter of life and death.”

“In six days, the hospital’s personal protective equipment including N95 masks, gowns, gloves, and more, will be used and gone. They’re near capacity of ventilators for critical patients, and for everyone else, will need to rely on emergency back-up ventilators,” Mayor Ravi Bhalla said in front of the Hoboken University Medical Center at 308 Willow Ave.

” … Can we find 13 ventilators in this country to avoid having to make life decisions is the question that we’re facing here. We need those ventilators to not force doctors to choose one patient over another and possibly lose lives: so this is literally a matter of life and death.”

New Jersey has the second most confirmed cases of the coronavirus in the country, behind only New York, and the Garden State as a whole has 6,876 positive patients as of this afternoon, according to the New Jersey Department of Health.

In just 24 hours, Hudson County’s cases saw a huge spike: going from 260 cases to 441, state officials said at their own news conference this afternoon.

During the question and answer session with the media, Bhalla said that Hoboken now has 56 cases, up from 41 yesterday.

During her remarks, Council President Jen Giattino stressed that times like these are when people come together and that Hoboken needs help.

“Hoboken: we are right across the river from the epicenter and I think it’s very important that we all remember, in times like these, is when we as a nation all come together,” she stated.

CarePoint Chief Hospital Executive Ann Logan said that their facilities, which have seen a fatality each at Christ Hospital in Jersey City and the Bayonne Medical Center, are becoming overwhelmed quickly and need a significant amount of new equipment before the COVID-19 surge hits.

She also said that the hospital is short staffed on medical personnel, although they have been fortunate to have only 5 employees “out on leave,” declining to get into their specifics.

In an interview, Bhalla applauded the efforts of Murphy, along with U.S. Sens. Bob Menendez and Cory Booker (both D-NJ), for urging the White House to stay on top of personal protective equipment shortages statewide.

“Senators Menendez and Booker have been on the front lines on a daily basis fighting for New Jersey residents and we’re deeply appreciative of their efforts,” the mayor began.

We streamed the entire press conference, as well as a live interview with Bhalla to our Facebook Page, which can be viewed below: 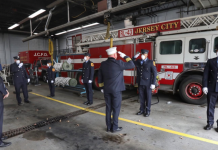 Jersey City has ‘battlefield promotion’ for 6 newly sworn in firefighters 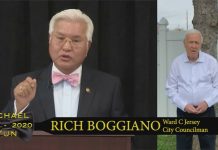