One week after President Donald Trump (R) stopped the separation of families at the southern border with Mexico, hundreds of people gathered at Sinatra Park in Hoboken yesterday to protest those very actions.

Although the president has stopped the policy, multiple national media outlets have been reporting that one week after the order, reuniting families remains a slow, tedious process.

Mayor Ravi Bhalla told the audience, some of whom were holdings signs that called for the end of family detentions, said that the policy of separating families is “patently inhuman and un-American.”

One of the most poignant and heart wrenching stories was delivered by Rev. Deacon Jill Singleton of the St. Paul’s Church in Bergen, an Episcopal Church in Jersey City, who spoke about her experiences working with asylum seekers at the Hudson County Correctional Facility.

“I met a Nigerian man by the name of Peter. He looked at me and said, ‘You’re my guardian angle because I’ve been here for nine months, and you are my one and only visitor. And today, this very day I got my asylum,'” said Singleton.

She then asked Peter what he was going to do.

“I looked at him and said where are you going to go, and he said, ‘I have no idea.'”

Singleton elaborated that she called colleagues to find out if Peter was inevitably released on that particular day who confirmed he was.

“I called first thing in the morning and they told me he was released, and they tried every phone number they had for him and he was nowhere to be found. So like many people before Peter and many people after Peter, he walked out of that Hudson County Correctional Facility and disappeared.”

The last speaker, Ronald Bautista, talked about his immigrant experiences and how he considers himself “one of the lucky ones” for residing here as long as he did as undocumented.

“I consider myself one of the lucky ones because I was undocumented for 11 years. And I would say that with the current administration, I wouldn’t have been able to do so,” the former mayoral candidate began.

“It’s very important for us to speak up and do what we’re doing here today because this means the world for not just the families at the border but every single family that’s in the United States with undocumented status.”

Late Tuesday evening, a federal judge in San Diego barred the separation of migrant children, ruling that they need to be rejoined with their families in the next 30 days, NPR reported. 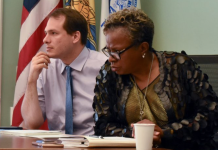 LETTER: P.S. 16 parents have been getting the short end of the stick at Jersey City’s Paulus Hook Park

Judge rules against releasing 1000’s of emails between Garcia, Zayas in...