After about a week of debate that spilled over into the public arena, Hoboken Mayor Ravi Bhalla and five members of the city council, the two sides have come to terms on a Hilton Hotel redevelopment agreement that comes with $4.85 million in community givebacks.Â 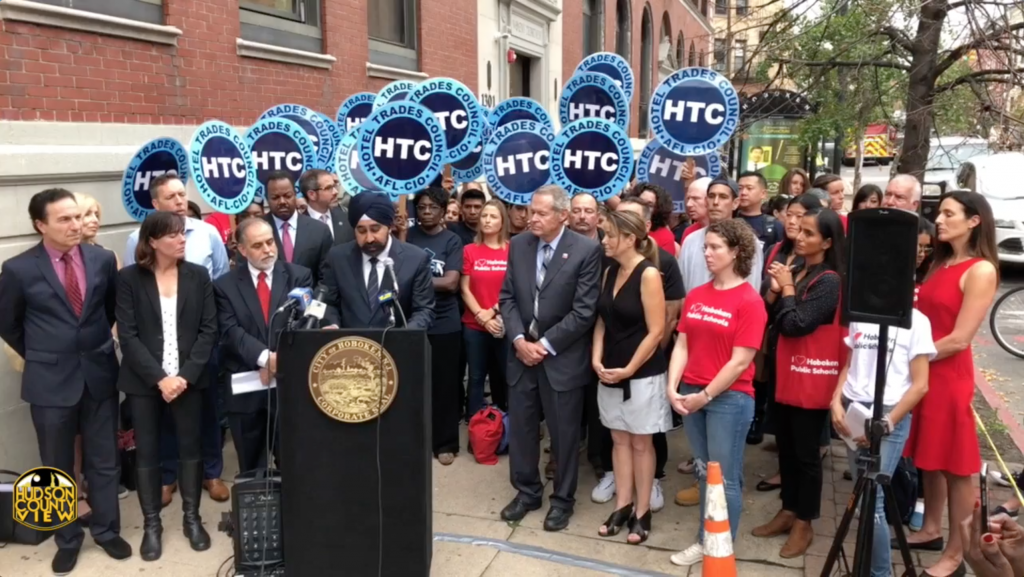 â€œI could not be more proud to bring this history making project to fruition; the community benefits of this deal will be positively felt throughout our community. I want to thank KMS Development for their longstanding support of the residents of Hoboken. I want to also thank the City Council for their commitment to Hoboken and working together with me to raise the standards of development in Hoboken,â€ Bhalla said in a statement.

The revised giveback program will allocate $2M to help establish the Hoboken Community Center, with up to 100K to be immediately available to fund their feasibility study, $1.165M for infrastructure, with $165,000 of this to be dedicated to the needs of the adjacent neighborhoods, $1 million to the Hoboken Public Education Foundation, $484,000 to the Hoboken Public Charter Schools, divided equally among the schools, andÂ $200,000 into Hobokenâ€™s Affordable Housing Trust.

“We are proud to provide our support for this incredible project that brings so many positives to Hoboken and to have collaborated with KMS and many stakeholders to deliver an expansion of community benefits in the areas of affordable housing, education, and infrastructure that help address the broad needs of our community,” said the council subcommittee that includes Ruben Ramos, Mike DeFusco, Tiffanie Fisher, Peter Cunningham and Jen Giattino.

“We thank Mayor Bhalla for prioritizing this project and look forward to working with him again on other important initiatives. We are recommending that our council colleagues join us to deliver a 9-0 vote for this important project at the upcoming council meeting on October 17th.â€œ

Early in the week, it did not appear that the Hoboken’s three charter schools would benefit from the project, but that figure quickly increased to $300,000 ($100,000 each) before reaching a final tally of $484,000.

“This is a world class Hilton hotel that will be an enhancement to life in Hoboken. We are excited this project enjoys broad political support and are proud to become a contributing member of the Hoboken community,â€ added KMS Principal Dennis Martin.

â€œWe thank mayor Bhalla for his leadership and the city council subcommittee members Peter Cunningham, Michael DeFusco, Tiffanie Fisher, and Jen Giattino and council president Ramos for their longstanding support and dedication over many years. The Mayor and City Council have been dogged advocates for their constituents and this is a better deal for Hoboken residents because of the benefits they each were able to secure in negotiations with us.â€