The City of Hoboken made an official offer to purchase the Union Dry Dock property from NY Waterway for $13.1 million, earlier today, roughly two months after approving an ordinance authorizing eminent domain proceedings. 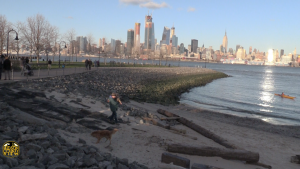 In a statement, Mayor Ravi Bhalla announced that the offer “matches the fair market value of the land, as determined by an independent appraiser.”

“The offer we made today reflects Hobokenâ€™s ongoing commitment to acquiring Union Dry Dock for a public waterfront park,” the mayor said.

“We will diligently continue the necessary steps of negotiating with New York Waterway to fairly compensate them for the land. I look forward to completing this process so Hoboken can finally connect our waterfront for all to enjoy.”

A spokesman for NY Waterway said the company is “considering our response” and that it “will advise Mayor Bhalla of our position at an appropriate time.”

The property, located at 901 Sinatra Dr., has been the center of a contentious battle between the two entities for several years now.

NY Waterway, which ferries thousands of people daily between New Jersey and New York, says that it needs the property for a ferry maintenance facility to keep up operations in the area, while Hoboken says the property is necessary to complete contiguous open public space along the Hudson river.

NY Waterway filed a lawsuit against the city in June, and asked a judge to order the city to not interfere with operations on the site, which the company purchased in 2017 for $11.5 million.

However, the judge dismissed the suit, which opened the door for the city to begin eminent domain proceedings.

Today’s offer, Bhalla said, is the “first step in good faith negotiations” between the city and NY Waterway.