The Hoboken City Council moved forward with ordinances to eliminate the Office of Constituent Affairs, which the mayor says he will veto, and to temporarily reduce the salaries of several public officials – with two other cost cutting measures being pushed. 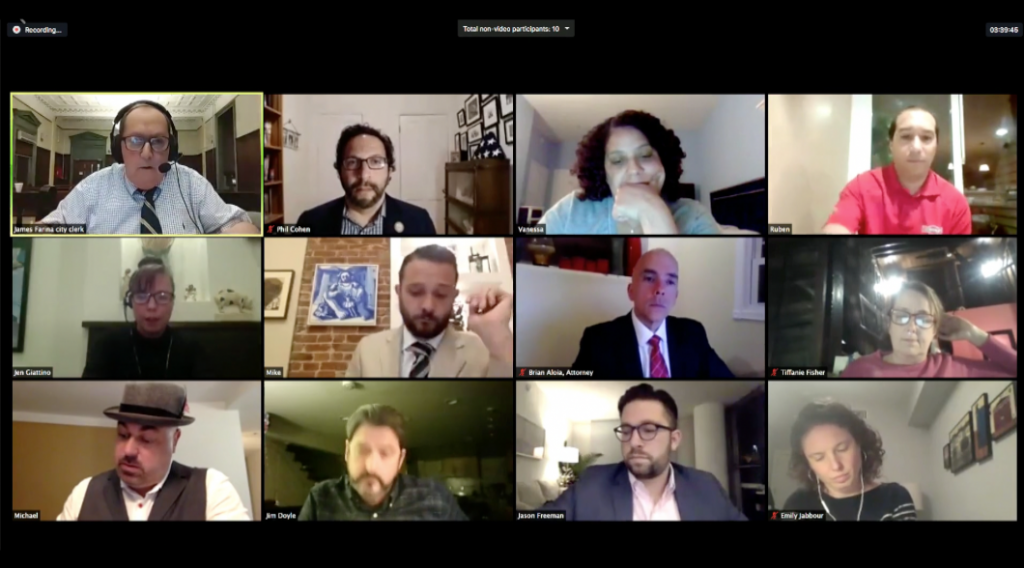 The move to axe the constituent services department, in particular, drew a strong response from Mayor Ravi Bhalla, who vowed to veto the measure.

“The action taken by six City Council members was, in the words of Monsignor Michael Andreano, an â€˜abominationâ€™ that hurts the most vulnerable members of our community in the middle of a national pandemic,” he said in a statement this morning.

“At a time when residents need help more than ever, Caroline Caulfield and Migdalia Pagan-Milano have gone above and beyond to help the elderly, disabled, and those most in need due to COVID-19.”

“This unfortunate ordinance, attempting to undermine City Hallâ€™s assistance to those in need, will be vetoed so Caroline and Migdalia can continue serving as a vital resource for all Hoboken residents.”

The moves come as Hoboken stares down the barrel of a multi-million budget hole that administration officials have yet to put an exact dollar amount on, but have said that it continues to grow every month.

The Mile Square City began the year with an at least $7 million deficit. Then the cornavirus hit.

Now, the COVID-19 pandemic has not only compounded the city’s financial troubles, but has exacerbated the already frayed relationship between the majority of the city council and the mayor and his administration.

The first ordinance, which abolished an office that had been reinstated by the city in 2018, was fiercely opposed by the administration.

Earlier this week, called the office “one of the most effective departments in City Hall” that was crucial in the response to the COVID-19 pandemic.

Prior to the vote, more than two dozen emails were read into the record in support of the department and its two employees.

“The outpouring of support from the administration … for the office of constituent services is puzzling to me. Does he not have the same regard for the other offices that represent vital municipal functions?” Falco said.

“This ordinance … is not being presented in retaliation for the mayor’s actions, but more in support of the mayor. His directive has shown that there’s a need to reduce staff and expenses … with the layoffs and forced retirements. So as a council, we’re assisting him in this.”

“The [layoffs] are okay, but the others aren’t okay?” Doyle said. “Either you’re against all of them or your for all of them.”

“I don’t think the solution to the layoffs is to fire more people from City Hall,” Jabbour added.

The mayor’s veto threat will likely only delay the ordinance’s passing. Barring any twists, the council should stick to the original voting lines, giving them the six votes to override the mayor’s veto.

Since Bhalla has taken office, the council successfully did an override in 2018 allowing a runoff referendum to appear on the November ballot (which passed easily), though were a vote shy last year when they tried to limit the number of non-civil service employees in the mayor’s office.

Today, Fisher responded that Bhalla’s statement was misleading since the council is not firing anyone via their vote.

“The mayor should spend less time misleading the public on this and more time focused on the significant financial crisis he has created.”

Meanwhile, the second approved ordinance reduces the salaries of the mayor and all nine city council members by 10%, as well as reducing compensation for department heads.

“I don’t think anybody here is going to pretend that a 10 percent reduction in salaries … is going to save what amounts to a $20 million deficit … What this doing is showing that we’re willing to stand together,” DeFusco said.

A resolution that would have eliminated the city’s in-house engineering department, however, was tabled without much of an explanation

With no budget introduced yet, the council and mayor will likely continue to lock horns on any expenditures or cost-saving measures put forward.

For example, one resolution abruptly added to the agenda on Wednesday would have increased the city’s third quarter tax bill to reflectÂ a five percent tax increase.

“There are a few certainty’s we already know, and there’s a few uncertainties … We know that the board of education has already passed their budget for this year: it’s close to an 8 percent increase,” Director of Operations/Acting Business Administrator Jason Freeman said.

“If you don’t do anything right now, you’re going to have make up the entire increase at the end of the year,” Freeman said.

“I just want to remind everyone that we have to send a tax bill out in the mail by June 30 … Failure to do so would have no tax bill going out and we would still be required to pay the county and state and we would have no cash flow for the remainder of the year,” she said.

“The urgency can not be understated,” later stating that she would have like the rate increase to be closer to 10 percent on the tax billing.

Some council members were unhappy with the resolution, given that no budget has been introduced yet. Russo asked to table the measure assuming no additional budgetary information could be immediately provided.

“This really causes me great concern: we have no idea what the budget numbers are going to look like,” Russo said before making a motion.

The resolution was tabled by a vote of 6-3, with Jabbour, Doyle, and Cohen voting no.

In a joint statement, the aforementioned trio expressed disappointment that the council voted down, in another 6-3 vote, a resolution that would’ve given council members a less expensive health care plan.

“The City’s HSA Plan is the same health care option Mayor Bhalla and his Directors use to insure themselves and their families, and it is sad that the Council members are willing to cut the Office of Constituent Services to achieve alleged cost-savings but arenâ€™t willing to make modest changes to their own health care benefits.â€