The Hoboken City Council voted down expanding the city’s cannabis review board, while okaying the first reading of an amendment for medical dispensaries approved by the state that would require a wait period before they can sell retail cannabis. 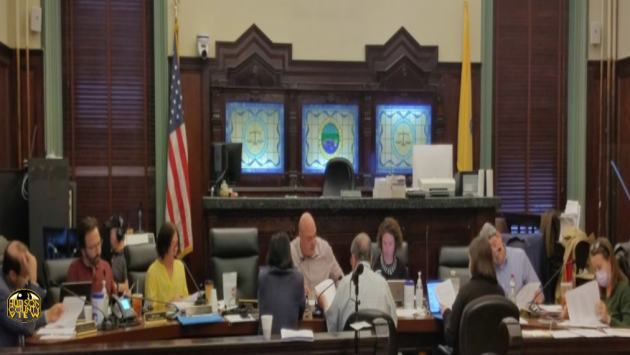 The ordinance to increase the CRB from three members to seven, including three members of the public and the public safety director, was rejected 5-3 in an up and down vote, which is standard for first reading.

“We wanted to change that and remove any appearance of impropriety … It was voted down by Team Bhalla,” she added, naming the council members who joined Russo in voting the measure down.

She also said that a planned amendment would have made two members of the public appointed by the council and two by the mayor since the public safety director didn’t want to sit on the board.

Jabbour said that she didn’t feel comfortable supporting the measure since it didn’t follow the protocols of going through subcommittee first, though Fisher said historically it has only taken two sponsors to get on the agenda until this year when Russo took over as president.

“But did you speak to any other members of the council?,” Jabbour asked.

“It’s been on the agenda and been circulated … If you’re being technical, that’s great, I’m going to put it back on the agenda,” Fisher replied.

“It would be helpful if it was shared with everybody. I don’t know if zoning is the correct committee,” Jabbour continued.

Fisher said that under Russo’s rules, local legislation has to go through committee though does not necessarily have to have the support of the subcommittee to be introduced.

“They didn’t say anything about that. We’ve had multiple conversations about legislative items being on the agenda and removed, and now one person wants to say it’s technical.”

As it looked like the argument between the councilwomen was going to carry on, Russo banged his gavel to call for order.

“I try to let council members say what they need to say for their constituency, for their ward, I try not to get into a lot of back and forth here at this dais. However, I think that it’s important that we point we point out the inaccuracies and some of the hypocrisy being spoken about,” Russo stated.

“Because someone does not agree with your potential legislation, you cry foul, when in fact, there was a majority on this council, under a former administration, when council members who are crying foul now did the exact same thing!”

“Ms. Fisher if you want to make those decisions, you should have run for mayor. You chose not to. You are a councilwoman. That is your role. That is the way this goes and you don’t like it. Let’s stop being childish. If there’s five votes to move something forward, it moves forward.”

He said there similarly weren’t votes for a bond ordinance, so it was removed from the meeting’s agenda.

At that point, 6th Ward Councilman Jen Giattino threw her hands in the air and looked appalled at the situation as Russo forged ahead, calling on Fisher to stop the “grandstanding” as well as to stop “spreading inaccuracies.”

Giattino didn’t let that slide, as she returned fire with her comments during new business.

“For grandstanding, do you guys want to see some great grandstanding? June 16th, watch that council meeting, it’s the last 10 minutes, and keep in mind all the people grandstanding knew a person of color had applied to the HHA board two days or one day before that,” she said.

“They all knew, so you watch: there’s some grandstanding. The thought of just a few people in Hoboken running everything, I don’t care who you are, and I’ve talked to you about this council president, when I was council president, I made sure everyone was on as equal amount of boards as possible.”

The expansion was rejected 5-3, with Fisher, Giattino, and Ramos voting yes.

The other aforementioned cannabis ordinance, introduced by 5th Ward Councilman Phil Cohen, ensures that medical dispensaries that won a state license in 2019 must sell medical cannabis for 12 months before applying to sell adult-use cannabis.

He thought it was necessary to maintain Hoboken’s compliance with state law.

The measure would apply to the Terrapin Care Station, which was approved last year.

“Is there a way we cannot give them that ability to sell recreational, and they can just be medical?,” asked Giattino.

“The answer is yes. It grandfathers their location. They’re less than 500 feet from each other,” Fisher replied.

“It does not pre-approve them in any way, shape or form. They can in fact go through the process,” Russo clarified.

“As of right now they cannot, right?” Giattino questioned.

Fisher argued that Harmony and Terrapin would not be in compliance, Russo said it would be up to the CRB to make that determination.

Cohen reiterated that the amendment to the law he had proposed was only to ensure they would sell medical cannabis for 12 months.

Despite the city’s recent amendments that limit the zoning of dispensaries, Russo said cannabis consumption lounges could still open in the future.

“I think that’s really dictated by the state at this point. In further iterations of what we want to do, we can always revisit those things. Personally, I have no problem with them. As a council, we’ll see where it goes.”

Prieto calls for ‘a friend’ as gov after being elected HCDO...