The Hoboken City Council unanimously approved (9-0) the introduction of the city’s 2020 budget, a roughly $118 million spending plan with a 9.8 percent tax increase – largely offset by a 6.52 percent county tax decrease – but what will eventually be approved could look very different. 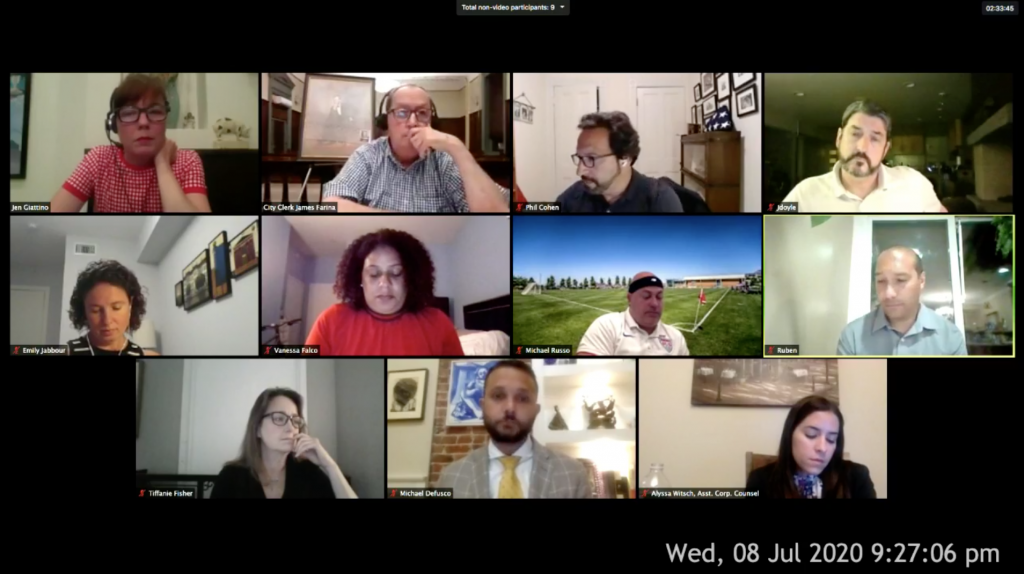 After being incensed about being kept in the dark on the city’s financial projections for the year, amid the COVID-19 pandemic, council members will likely spend the next couple weeks combing through city finances and making changes they see it.

“We’re over six months into a budget year and we didn’t see any concrete numbers until 48 hours ago,” 1st Ward Council Mike DeFusco said prior to the budget introduction vote.

Nonetheless, he “reluctantly” supported it so “the diligent hands of the city council go through the numbers and make this our own budget.”

“I trust that my council colleagues will take the next few days and weeks before the next meeting to make productive changes to the budget,” he added.

The $117.8 million budget comes with a 9.8 percent municipal tax increase, though, as Mayor Ravi Bhalla previously pointed out, this will only amount to an overall 1.4 tax increase as a result of school board, county, library, and open space taxes – the most beneficial decrease coming from the county.

The city had $2.7 million of direct costs related to coronavirus spending this year, according to Acting Business Administrator Jason Freeman.

Meanwhile, many of the city’s critical revenues fell sharply. Miscellaneous revenue fell by 26.6 percent from the previous year, while the city’s “anticipated surplus” fell by 26.4 percent.

Unforeseen financial risks remain as well. The city’s finance department says there is “possible pressure on August and November tax collections due to COVID-19.”

A one percent drop in the city’s collection rate is equal to roughly $2 million in lost tax revenue, officials said.

They are also anticipating “additional unknown COVID costs,” as well as a further depression of revenues “depending on COVID impact.”

Additionally, what the city could get from the state and federal government remains murky.

“Odds are … I imagine there will be some issues with state aid,” stated Hoboken Financial Director Linda Landolfi.

“So we do have some areas of concern that we will be watching closely as the year goes on, including on the cost side – any COVID costs that are not expected at this point.”

As they’ve done previously this year, council members made some cuts to emergency budget appropriations – showing their weariness in approving emergency expenditures before the city’s financial situation is as airtight as it could be.

“We’re getting to a point where we’re committing to eight full months of the year of temporary appropriations, and that makes no sense,” 2nd Ward Councilwoman Tiffanie Fisher said.

Nevertheless, the city administration maintains their introduced budget is responsible.

“Through a combination of difficult cuts and new revenue sources, we have chipped away at a nearly $20 million budget shortfall and are introducing a budget that would result in an overall property tax increase of just over one percent,” Mayor Ravi Bhalla said on Monday.

“I look forward to working collaboratively with the city council in the weeks ahead as they consider and ultimately adopt a budget.”

Hoboken Freeholder Romano ‘pleased and honored’ to be running for mayor

Bill that would give benefits to 1st responders disabled or killed...