The Hoboken City Council approved an amended North End redeveloper agreement that will likely include the location of a new Department of Public Works garage, as well as a preliminary budget with no tax increase at another long meeting last night. 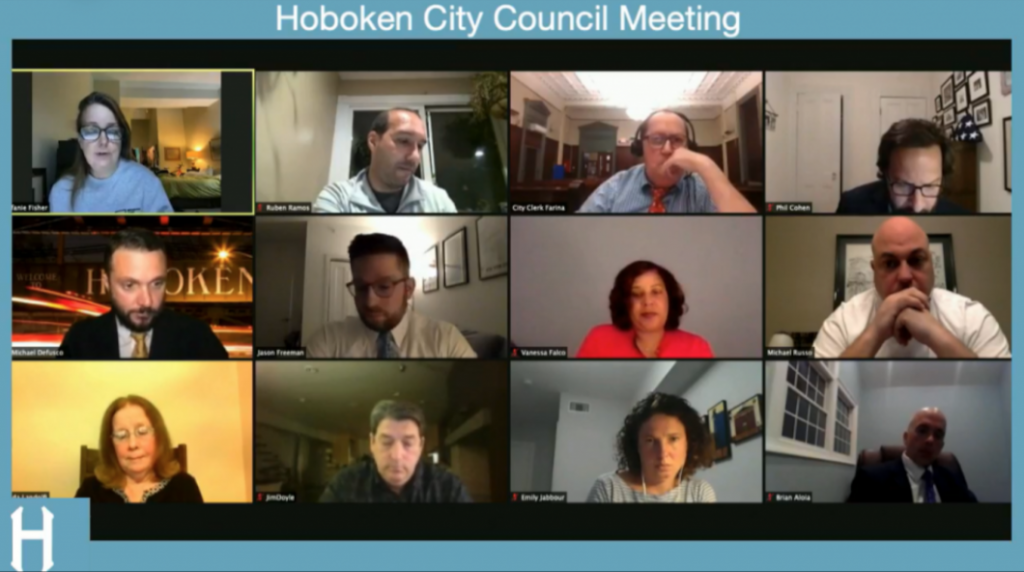 Bijou Properties was designated as the redeveloper for the 1500 Clinton Street project.

They unveiled a proposal last week that would include a new DPW garage, City Hall annex, and mixed-use art and retail project, though those details were removed from the resolution the council okayed last night.

Resident Ariel Kemelman noted that Hoboken has the lowest open space per capita in the country and should find a way to move forward after the council approved the North End Redevelopment Plan last month.

“We should find a way to make it work because we just can’t pass up this opportunity,” Kemelman said.

Council President Ruben Ramos, along with Community Development Director Chris Brown, both responded that the measure that would be voted on had changed.

“There’s no voting on any plan proposals this evening,” Ramos said.

“We’ve stripped out all mention of a project and proposed architectural plans,” added Brown.

“If we approve this tonight, we are saying to the mayor and the administration do not consider any other alternatives,” she said, citing a letter from Mayor Ravi Bhalla sent to the council shortly before the meeting that indicated Bijou Properties was the only interested party.

“It’s the worst possible deal for Hoboken … This deal literally could not be any worse,” she said of the initial proposal, continuing that Bijou’s proposal would cut into open space designated for a new park.

Business Administrator Jason Freeman said time was of the essence here, noting that they have a preliminary timeframe where they need a new DPW garage built in six months and the full project completed in 17 months.

“There was a concern … Today, we’re saving the taxpayer money and getting the negotiations started,” chimed in Councilman-at-Large Jim Doyle

Furthermore, 3rd Ward Councilman Mike Russo said he did not like the initial plan either.

Ultimately, the council approved the project via 7-1, with Fisher voting no and 6th Ward Councilwoman Jen Giattino absent.

As for the budget, Freeman gave a presentation using a $118,251,029 figure including all local expenditures, though the $125,103,604.56 budget before the council included state and federal allocations as well.

The budget will be bolstered by American Rescue Plan funds, with the city using $7 million out of the $27,201,022.91 in federal monies to help balance the budget.

“We have four years to spend it,” he added of the federal relief.

Furthermore, the local tax levy will go up $60,701,787 and while salary and wages are going up, there will be no new hires.

Beyond that, the Hoboken Police Department is down 15 officers from it’s peak, with six police academy recruits expected to join the force soon. Also, the pension bill for the city’s employees went up 10 percent, while open space funding is going from $958,000 last year to $1.5 million this year.

Freeman added that it is likely they will see large upticks in tax appeals due to COVID-19, part of the reason why they want to increase the overall budget by 3.5 percent.

“The cap bank allows us to grow the budget while growing revenue while not increasing taxes year over year,” Freeman said.

“I’m actually gonna be supportive of that cap bank tonight. We’re right-sizing that bank,” noted Russo, who is typically fiscally conservative when it comes to the city’s spending plan and said people should be “extremely happy” that there is no tax increase.

“You got your early Christmas present, director,” he told Finance Director Linda Landolfi.

Ramos had a far less rosy perspective about the turn of events.

“Without that $6.5 million, we’d have a totally different conversation tonight,” noting that the city was essentially bailed out, thanking congressional representatives who voted for the American Rescue Plan.

Ramos said they will adopt the final budget before the summer and that a May 5th public meeting will take place after several budget workshops next week.