Hoboken Business Administrator Stephen Marks is leaving his post in the middle of the month to serve in the same capacity at Kearny Town Hall, officials told HCV. 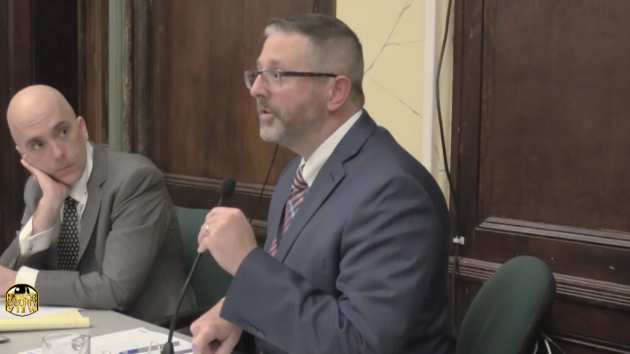 â€œI thank Stephen Marks for his seven years of service to Hoboken. He has played a critical role in the day-to-day operations of municipal government, and a number of our quality of life initiatives including the Northwest Park, Southwest Park, revitalization of Washington Street, creation of a Special Improvement District, a re-negotiated agreement with SUEZ, and more,” Mayor Ravi Bhalla said in a statement.

“Hoboken was very fortunate to have his expertise and guidance, and I wish him well in his next role.â€

Marks, who said in December that a projected $7 million budget gap could equate to 80 layoffs, will serve his last day as Hoboken BA on February 16th, with the city noting that there split was an “amicable departure.”

In the interim of naming his successor, the responsibilities of Hoboken BA will be shared by Assistant Business Administrator Caleb Stratton, named assistant BA in December, and Operations Director Jason Freeman.

His next gig will be as the Kearny business administrator, making for an easy work commute since that’s the town he lives in.

“I’ve known Stephen for over 20 years. His knowledge of local governance, including civil service, municipal finance and land use requirements, make him an exceptionally strong candidate for our opening in Kearny,” Kearny Mayor Al Santos told HCV.

“I am very confident he will do an excellent job as Administrator of his home community.”

Additionally, Hoboken 2nd Ward Councilwoman Tiffanie Fisher said that given the struggles the city is expected to endure during this budget cycle, Bhalla should make hiring a new BA his top priority.

â€œWhile I wish Director Marks all the success in his next endeavor, the immediate focus of Mayor Bhalla should be finding a new Business Administrator,” she said.

“Given the complexities that Hoboken faces, not the least of which is a significant budget shortfall that needs to be addressed this year, I urged Mayor Bhalla to do a wide search to find the best and most experienced person for the role. Itâ€™s what taxpayers and residents deserve and we canâ€™t afford to get this hire wrong.â€

1st Ward Councilman Mike DeFusco was a bit less kind in his reaction to the news of Marks’ departure, calling the move “alarming” in light of the preliminary budget’s current woes.

â€œThe sudden resignation of a long-time business administrator as the City deals with a multi-million dollar budget deficit is alarming. Director Marks is a professional respected across the state and itâ€™s unfortunate the mayor has consistently taken a spend now, worry later approach to put the state of our finances in jeopardy,” he said.

“Without the director at the helm, I am concerned about this administration’s ability to prevent a massive tax increase in this yearâ€™s budget. The City Council is prepared to work with the Mayor and provide all of the resources necessary to recruit a suitable replacement but now itâ€™s up to him to stop staffing political operatives within City Hall and work on a cogent, long-term policy to restore fiscal responsibility in Hoboken.â€

City spokesman Vijay Chaudhuri expressed great dissatisfaction with DeFusco’s remarks, calling on him to do his job instead of playing politics.

“8 of the 9 Hoboken councilmembers are working collaboratively together with the administration to enact a responsible budget. We encourage Councilman DeFusco to press pause on his political ambitions and work with the Mayor and his colleagues on the Council,” Chaudhuri said.

“Instead of failing to show up for half of the council meetings in 2020 while vacationing in Hawaii, and paying a public relations firm to send out his press releases, we hope the councilman simply does his job by showing up to meetings which include matters of importance to the budget. We look forward to his constructive feedback.

The bitter exchange didn’t end there though, as Caitlin Mota, a spokeswoman for DeFusco who worked on his re-election campaign, noted that Chaudhuri is Bhalla’s former campaign manager who continually attacks political enemies through a taxpayer-funded position.

“Attempting to smear Councilman DeFusco’s reputation for missing a single council meeting is irresponsible and his dedication to the 1st Ward reflects in his actions and service,” she added.

Furthermore, 5th Ward Councilman Phil Cohen, a member of the council’s budget and finance subcommittee, said he looks forward to working with his colleagues and the Bhalla administration on this year’s budget – also wishing Marks the best of luck.

However, he also took umbrage with DeFusco’s characterization of Marks’ departure, noting that the two had an icy relationship during his tenure in Hoboken.

“I hope that Councilman DeFusco will join me and work constructively and professionally with Director Marksâ€™ successors as we tackle the challenges of the work ahead.”