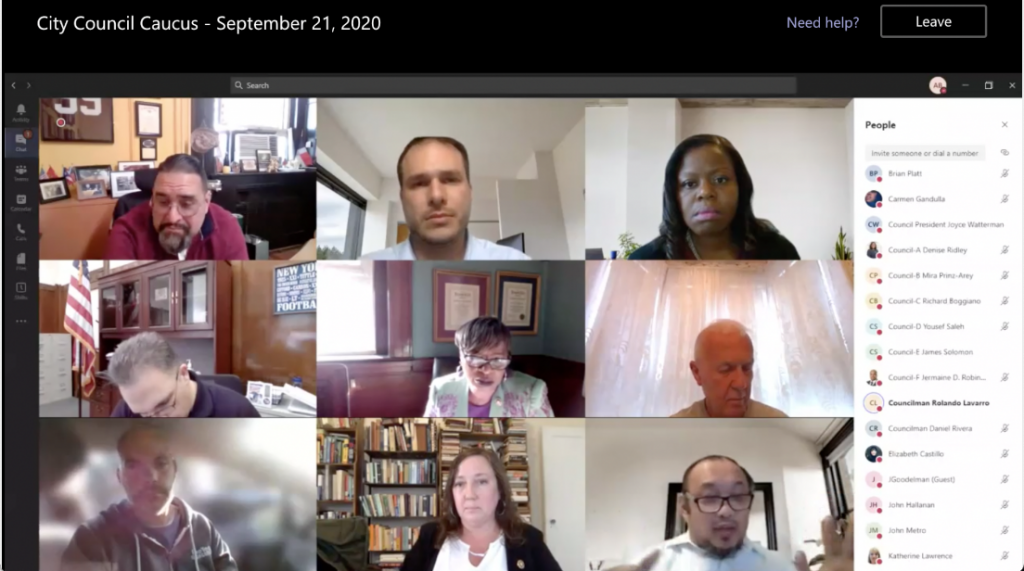 “There’s no police input into this. I see different organizations that are represented and most of them are anti-police and we’re gonna have problems in this city and it’s gonna hurt people in the communities,” Ward C Councilman Rich Boggiano said last night.

” … I would challenge that these organizations are not anti-police, they’re pro-community and pro-social justice and I think that the perception that they are anti-police is at the crux of the whole problem and the challenge that we have in addressing the systemic issues that are affecting our communities today,” responded Councilman-at-Large Rolando Lavarro.

Boggiano, a retired Jersey City police detective, said he specifically had a problem with the ACLU being involved with Solomon’s ordinance, which he said he couldn’t support.

“Defunding and all this has got to stop because we’re hurting the people here in this city,” he shot back.

Earlier this month, Solomon said that he had drawn up with a CCRB ordinance after working with ACLU-NJ and the Jersey City Anti-Violence Coalition Movement.

Shortly after that, Ridley indicated that she had her own CCRB proposal in the works, as HCV first reported.

While the measures have a number of similarities, such as giving the review board subpoena power, a “trigger mechanism,” disciplinary power, and budget protections, they differ on who will actually serve on the board.

Solomon’s draft would allow seven groups, PACO, the Jersey City NAACP, Jersey City Together, Hudson County Partnership CMO, ACLU-NJ, Hudson Pride, and the JCACM, to have one board pick each.

Additionally, there would be one former member of law enforcement, along with three council members or their respective designees.

On the other hand, Ridley’s draft would have nine members instead of 11, with one member from each of the six wards being nominated by the council, one from a civil rights organization, police association, and practicing lawyer in a related field, respectively.

Councilman-at-Large Daniel Rivera agreed with Boggiano that is was concerning that police organizations weren’t more heavily involved in this discussion, along with Latino groups.

“ … We have a concern, we understand that we’re catering to small groups and we need to bring ‘em to the table – but have we reached out to the people who have the majority of these concerns over a topic that’s pretty much illegal to do right now. If you’re not going to include the brown community… don’t let it come out your mouth, the black and brown,” Rivera said.

“ … When I say to innovate, and to do so, what I mean is to do it right. And right does not mean arming civilians with pitchforks to go after police officers – that’s in no one’s interest. So building CCRBs that have robust due process, built in for police officers that ensure a fair resolution of complaints is in everyone’s interest.”

Shalom continued that he is simply “pro-police accountability,” also noting that the state budget will allocate a $600,000 line item for training once Assemblywoman Angela McKnight’s (D-31) CCRB bill makes its way through the legislature.

Her bill would allow subpoena power, which is necessary following a New Jersey Supreme Court ruling that limited the powers of Newark’s CCRB.

From there, Solomon gave a brief presentation on his proposal, which noted that he expected a vote on second reading for both measures on October 21st.

Solomon pointed out that while this figure may sound high, it’s only about 1 percent of the public safety budget and that the city has spent over $1 million on legal fees/settlements for alleged police misconduct.

At this point, Council President Joyce Watterman urged for her colleagues to table the CCRB ordinances until they could reach a consensus, but that didn’t happen as Ridley and Solomon both agreed to speak offline between now and Wednesday.

As a result, both ordinances remain on the agenda for the time being.

“I just want to say for the public:it’s confusing, it is, all the power does not lie within the city concerning these boards … With both of these ordinances going forward, I just hope that we are somehow connecting with the state seeing how we can support the state – the power lies with the state,” Watterman added.

The Jersey City Council will convene tomorrow at 6 p.m. via Microsoft Teams.

LETTER: There is zero doubt in the current leadership at the Bayonne BOE

After asking students to move out, Stevens announces 1st case of...