Former Hoboken Assemblyman Carmelo Garcia, also a former deputy mayor in Newark, was among three charged in connection to a scheme to solicit bribes from two businessmen in the Brick City, U.S. Attorney Craig Carpenito announced. 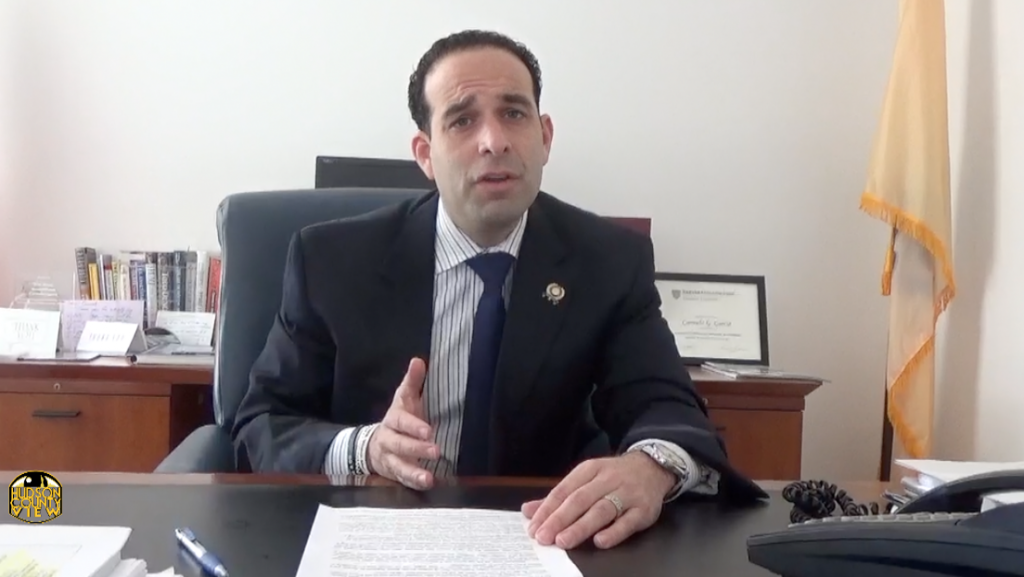 Garcia, 45, of Hoboken,; Frank Valvano Jr., 52, of Florham Park, and Irwin Sablosky, 60, of Springfield, are each charged by complaint with one count of conspiracy to commit bribery in connection with the business and transactions of a federally funded local government and organization, Carpenito said in a statement.

Garcia was the former deputy mayor for Newark Economic Development Corporation, and prior to that, an executive officer of the NCEDC (now known as “Invest Newark”).

Valvano and Sablosky are co-owners of a New Jersey-based pawnbroker and jewelry business. The defendants will appear in federal court on a date to be determined.

From 2017 through April 2019, Garcia sought and received significant monetary payments and other benefits from Valvano, Sablosky, and others in exchange for Garcia’s use of his official positions and influence to assist Valvano and Sablosky with securing redevelopment agreements (RDAs) with the City of Newark, the criminal complaint says.

According to federal prosecutors, the businessmen sought to purchase and acquire various city-owned properties for redevelopment, including obtaining preliminary designated developer status, and to ensure that Garcia did not act against their interests.

In addition to money, Garcia also received jewelry from the pawnbroker and jewelry business that Valvano and Sablosky co-own.

Phone records and text messages obtained by law enforcement document extensive communications among Garcia, Valvano, Sablosky, and others about the bribery scheme.

These include text messages in which Garcia arranged to personally collect cash provided by Valvano and Sablosky.

In one instance, in June 2018, Garcia, then acting deputy mayor and director of the city’s Department of Economic and Housing Development (EHD Department), received an envelope containing $25,000 in cash, supplied by Valvano through an intermediary, in the restroom of a New Jersey restaurant.

“When defendant Garcia arrived at the Restaurant, he was carrying a gym bag and told Individual 2 to meet him in the bathroom,” authorities allege.

The complaint continues that Garcia was then seen leaving the restaurant with the gym bag Individual 2 had placed the cash in.

Text messages obtained by law enforcement show that Garcia used his personal cellular phone to coordinate the location and timing of the meeting.

Garcia, whose name and official title were also prominently displayed on the letterhead, was copied on both letters.

In text messages, Valvano and Sablosky discussed additional payments of money and jewelry the two had made to Garcia, and also to an associate of Garcia (Individual 1), as well as their ongoing efforts to obtain RDAs with the city to acquire and redevelop additional properties.

For instance, on March 31, 2019, Valvano texted Sablosky to complain that Garcia’s associate, who sometimes served as an intermediary between Garcia and Sablosky and Valvano, was “already looking for [more] money.”

After observing that “We’ve done nothing but spend tons of money and give away jewelry,” Sablosky noted that “Carmelo [Garcia] wants more too. We can’t afford it … We’re a [expletive] money well for these guys to keep coming back to.”

On April 13, 2019, Sablosky also sent text messages to Valvano regarding a meeting he had with Garcia the previous day and his giving Garcia an additional payment of $5,000.

Sablosky noted that Garcia had “showed up [at] 5pm last night” to discuss another “RDA” he and Valvano were attempting to obtain from the city.

When Valvano asked whether there was “Any mention of $$,” Sablosky responded, “He [Garcia] didn’t just come to visit!! Lol. He got another 5,” referencing the $5,000 payment.

Sablosky also told Valvano, “When you get back we have to add everything and sit down with him [Garcia]. I want to get these RDAs through before we start rocking the boat.”

The count of conspiracy to commit bribery carries a maximum penalty of five years in prison and a maximum fine of $250,000, or twice the gross pecuniary gain or loss from the offense.

An attorney for Garcia could not be reached at his office on Thursday afternoon.

HCV had previously reported that Garcia was identified as a co-conspirator in a Newark corruption case where a councilman was charged with wire fraud.

In 2013, Garcia ran for the state assembly seat in the 33rd Legislative District and cruised to election with the support of the Hudson County Democratic Organization, but he didn’t seek re-election in 2015 after the HCDO decided he wouldn’t get back on the party line.

He is currently employed as the executive director of the Irvington Housing Authority and served in the same post in Hoboken before being voted out in August 2014 at a tumultuous meeting..

Sources: Carmelo Garcia hosts fundraiser, may run off the line in...