Disabled cannabis activist Edward “Lefty” Grimes the Union City Board of Commissioners and Mayor Brian Stack to improve wheelchair access throughout the city so that they would have better access to meetings. 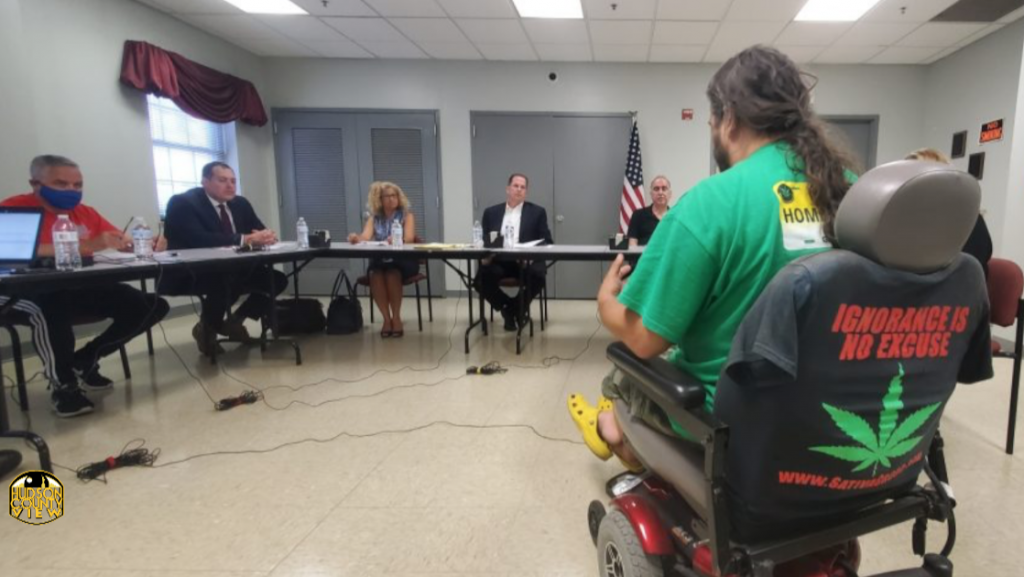 Grimes, a Bayonne native, said he could not go into the Union City Police Station since he uses a wheelchair and they had no accessible ramp in the front. While there is a ramp in the back, he argued that it is still difficult to access.

“She had to call a cop to come to open the wheelchair accessible door for me, which took like 10 minutes in the 90-degree heat. You helped us once before,” Grimes said before the board at last night’s meeting.

“We need your help,” Grimes said.

“That shouldn’t have happened. I will definitely address that,” Stack responded.

He said along with corporation counsel, he would speak with Police Chief Nichelle Luster about the matter and sought Grimes’ phone number to follow up.

“Union City is no different. The wheelchair access is bad,” he said.

While buildings built before the federal Americans with Disabilities Act (ADA) was passed are “grandfathered in” and allowed to be inaccessible, Grimes contended that “wheelchairs are grandfathered out, that’s how I look at it.”

Grimes also noted that Stack, also the state senator for the 33rd Legislative District, is on the Senate Community and Urban Affairs Committee and could use this post to advocate for changing municipal policies to be more ADA accessibe.

“I wanted to do a Zoom meeting. When I called for access for disability accommodation for that as you would do with hearing impaired, visually impaired, they said they don’t do that anymore,” Grimes add.

“For 14 months, we gave all these things to healthy people, and now disabled people are asking for those things, and now all of a sudden they can’t do it,” he added regarding coping measures during the COVID-19 pandemic.

He noted he holds commissioner meetings throughout the city, rotating locations to accommodate different neighborhoods and people with difficulty getting to certain places.

“We want to take part. I want to be able to speak to the council from my home,” Grimes responded. He noted the council meetings have several different sorts of formats.

Grimes also pointed out he has been to many council meetings across the state advocating for medical dispensaries for sickly patients.

“Get me an email, just tell me what you believe, what you would like, and I’ll get legislation introduced, and I promise you I’ll make sure the change is made here also. It should have been a long time ago, and that’s on me,” Stack added.

“The disabled community thanks you,” Grimes answered.

“My dad was in a wheelchair before he passed away. You have my word it will be done,” Stack said.

He also recalled an instance they were treated badly at a restaurant in Jersey City.

“I got so angry. They said, ‘oh, you’re in a wheelchair,’ when we arrived after making reservations. And it was hurtful, big-time hurtful,” Stack noted.

To that end, Stack said he would have his aide work with Grimes on the legislation and asked corporation counsel to prepare an ordinance for the next board of commissioners meeting related to wheelchair accessibility.