While the Bayonne Public Schools continue to be targeted by a yet to be identified Twitter user, all facilities will remain open today since “all measures have been taken to safeguard our students and faculty,” Mayor Jimmy Davis said.Â

“As most of you are aware, another threat was uncovered last night. The BPD is working tirelessly w/ counterparts to track down the source,” Davis tweeted about an hour ago.

“Schools will open, as we are confident that we can keep our children safe. All measures have been taken to safeguard our students & faculty.”

All Bayonne school district was closed yesterday as authorities assessed a Twitter threat that said he would “shoot up” each building, and while the suspect is yet to be identified, schools were scheduled to reopen today.

The new threat Davis references is a tweet that has since been deleted that says “I got 4 more days to shoot up the school” from user @Ispakigan_moren.

“nice, you evacuated. I got 4 more days to shoot up the school hahaha gonna be funn [sic] Y’all are stupid [racial slur]…..tomorrow;-) _),” the tweet said.

Since Davis’ posting, yet another tweet from the same account hasÂ been posted with a similar message.

“You think you guys evacuated the school but that was all part of the plan. @Bayonne BOE watch your back I’ll be coming.”

At a press conference yesterday, Davis said that officers from the Bayonne Police Department and Hudson County Sheriff’s Office would be stationed at every school today as one of several safety precautions. 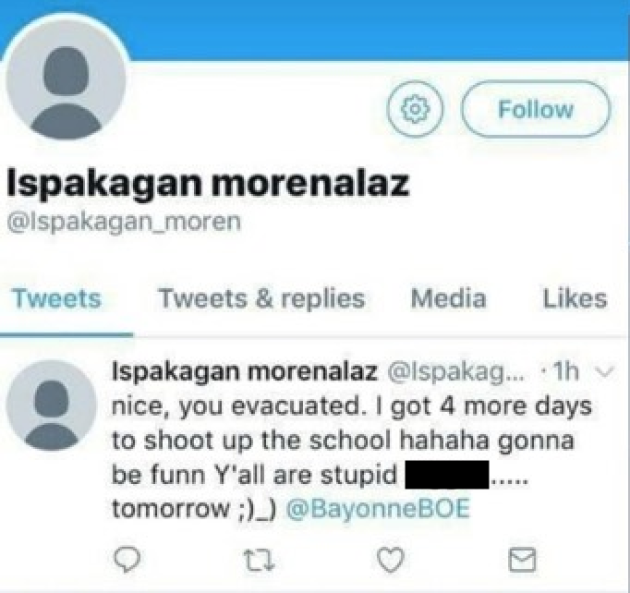 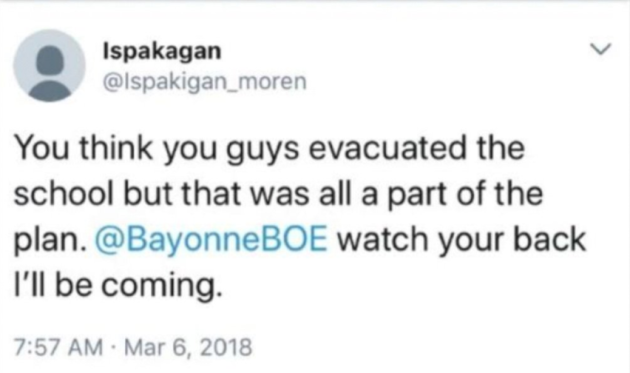 Payne comes out against Scott’s GOP blueprint, says it would raise...