Former Union City Superintendent of Schools Stanley Sanger, who retired in mid-2014 and earns an annual pension of $167,082, has been hired to run the city’s housing authority for about $150,000 a year.

“I’m excited to return to Union City, where I have good relationships, had success as superintendent of schools and look forward to improving the city through our housing program,” Sanger, who takes over the post on Monday, said over the phone this morning.

When asked to address being able to collect his pension and another salary at the same time, Sanger said that he will not be receiving a pension from working as executive director of the Union City Housing Authority, concluding with “good things are gonna happen.”

A former social studies teacher, Sanger took over as superintendent of schools in 2003 and is credited with  helping build seven new schools, including the Jose Marti Freshman Academy, and drastically improving the academic performance of what once appeared to be a doomed school district destined for a state takeover.

A University of California at Berkeley professor wrote a book in 2013, “Improbable Scholars: The Rebirth of a Great American School System a Strategy for America’s Schools,” called the turnaround of the Union City schools “a playbook, not a prayer” for education reform.

Sanger, who lives in Paramus, also said his first day at the new job is Monday, April 18th and that he wasn’t at liberty to discuss his contract since it hasn’t been finalized yet.

However, according to sources with knowledge of the situation, who spoke under the condition of anonymity, Sanger will be earning about $150,000 a year.

Public records show that Sanger’s final annual salary at the Union City Board of Education was $244,143 netting him a yearly pension of $167,082. 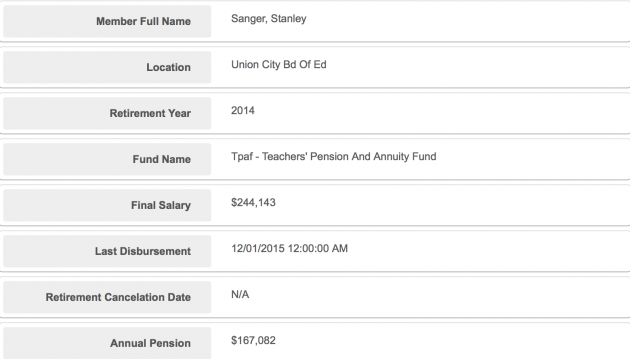 Christopher Santarelli, the deputy director of communications for the New Jersey Treasury Department, said in this particular situation, there is nothing wrong with collecting a school pension while earning another salary.

“Mr. Sanger retired under the [Teachers’ Pension and Annuity Fund] from the Union City BOE on July 1, 2014. As long as he did not return to employment with his former employer within 180 days of retirement, he has a bonafide severance from employments, provided he did not have a prearranged employment agreement prior to his retirement,” he said in an email earlier this week.

“The executive director position for the Union City Housing Authority would not qualify for participation in the TPAF. Therefore, he can continue to receive his retirement benefits, but he will not be eligible to participate in any other retirement system.”

Additionally, according to public records, Sanger received $166,630 for unused sick and vacation days and most recently received a check from the Union City Board of Education for $46,000 (before taxes) on July 15, 2015 as what appears to be the final portion of the payout. 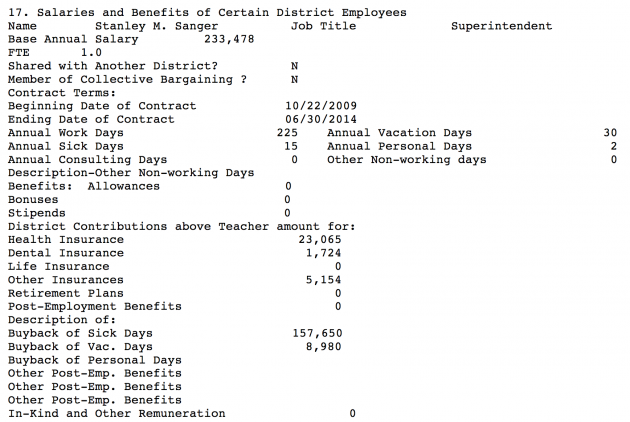 Only Hudson County View reported in early February that the Union City Housing Authority was wrapping up a nationwide executive director search following the retirement of longtime ED Virgil Cabello, who was appointed to the job back in 1987.

Cabello is still being utilized a consultant for the authority at a rate of $150 per hour.

Despite sparking interest from at least 15 applicants located in places such as Colorado, Ohio, Chicago and Florida, the board officially appointed Sanger to the board at a special meeting on February 23, according to their official meeting minutes.

Furthermore, a HUD spokesman said the agency “has no formal review or approval” of local hiring decisions, and therefore had nothing to add about the Union City Housing Authority’s selection of Sanger.

Several calls to the Union City Housing Authority to inquire about why Sanger was the unanimous choice of the board or what his exact terms of compensation will be were not returned.

PS 34 teacher referred to students as ‘future drug dealers and...