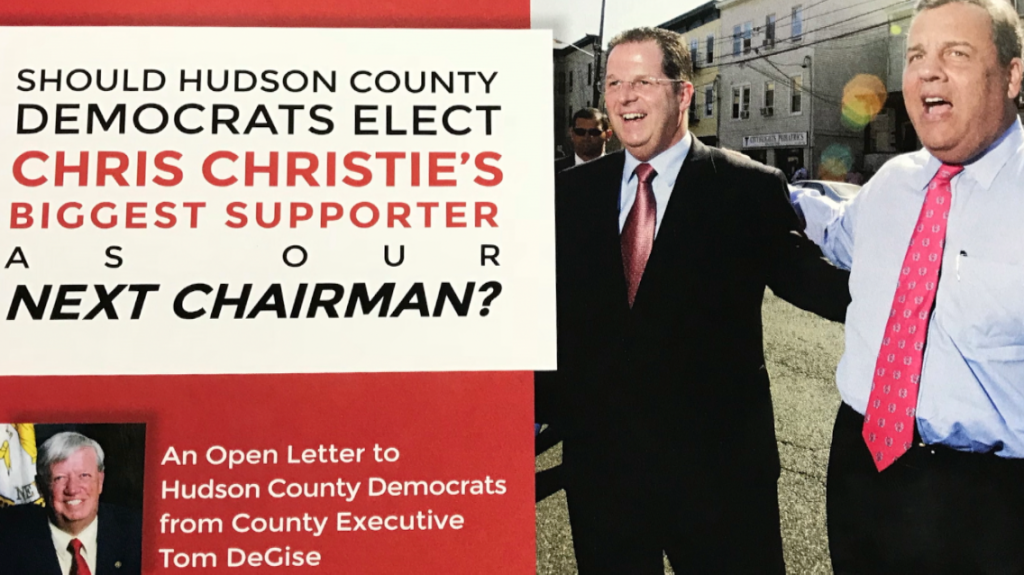 “Should Hudson County Democrats elect Chris Christie’s biggest supporter as our next chairman?,” the front of the mailer says, with a picture of Stack and Christie standing with their arms around one another.

“On November 4, 2013, Governor Christie choose to spend the night before his re-election at a large rally in Union City hosted by his close friend and strongest supporter in the state legislature: Mayor and State Senator Brian Stack.”

DeGise continued that most Democrats found the scene to be “very disturbing” and was a “devastating blow” to the Democratic gubernatorial nominee: Barbara Buono, who was a state senator at the time.

Christie cruised to re-election as Buono failed to gain any significant establishment support, getting bested by about 22 percentage points.

The county executive, who is gearing up for a battle in June 2019 after Stack and Jersey City Mayor Steven Fulop announced their intentions to replace him, didn’t stop there though, continuing to link Stack to Christie’s legacy.

“Stack remained supportive of Christie even after the former Governor broke his word and failed to fund the state pension system,” also mentioning that Christie increased health insurance costs and severely reduced state aid in many public school districts – though Union City wasn’t one of them.

DeGise concluded by saying that Stack had no regard for throwing the county into a “chaotic situation” by creating a civil war as U.S. Senator Bob Menendez (D-NJ), a former Union City mayor, is up for re-election.

“Although Stack claims to strongly support Menendez, he was also strongly and publicly supporting me – up until a few weeks ago.”

He also hinted that a candidate may “emerge” to challenge Stack when the Hudson Dems vote on the HCDO chair on June 12th.

Last month, Stack hit DeGise hard by claiming “this is no longer the 1950’s when one political boss is served,” also claiming the county has lacked diversity under the incumbent’s watch.

DeGise fired back days later, calling the accusation “disingenuous” and “laughable” during an appearance on our live show.