In a lawsuit filed in Hudson County Superior Court, North Bergen mayoral hopeful Larry Wainstein says that the township’s school referendum should not take place on December 11th since it was not properly noticed.Â

“This special election was not properly noticed. It is being held at a time to suppress voter turnout and to benefit Sacco’s political machine,” Wainstein said in a statement.

“I am asking the court to stop Sacco from disenfranchising voters by having an election under a cloak of darkness.”

The suit, filed on November 30th, alleges that the ballot question was not properly noticed, since the notice was printed in the North Bergen Reporter – a weekly publication.

“The Defendant’s transmittal was done on a Thursday for a newspaper that was being published on Monday. Accordingly, the North Bergen Reporter did not have the ability to publish the Notice as per the statue and the caselaw,” Mario Blanch, Wainstein’s attorney, argues in the suit.

If approved, the biggest impact of the referendum would be the North Bergen BOE purchasing the old High Tech High School building at 2000 85th Street.

In his statement, Wainstein continues that while he supports rebuilding North Bergen’s schools, “we cannot give $60 million dollars to a corrupt Sacco administration.”

Predictably, North Bergen BOE spokesman Phil Swibinski said that there is no reason to believe Wainstein’s lawsuit has any merit and that the referendum should pass by an overwhelming majority.

“Larry Wainstein’s desperate attempt to stop North Bergen voters from having their voices heard is destined to fail just like his multiple campaigns for Mayor have. It’s the height of hypocrisy for Wainstein to oppose this innovative school realignment plan when he has publicly complained for years about overcrowding in North Bergen schools,” he said.

“This plan would solve that problem without raising school taxes, but of course Wainstein is against it because of pure politics and hatred for Mayor Sacco and anything he proposes. When the school referendum passes overwhelmingly on Tuesday it should be seen not just as a tremendous victory for North Bergen students, but as another in a long string of losses for Lying Larry Wainstein that is certain to continue in May.”

Wainstein added that if the referendum is not rescheduled and ultimately passes, it would be “Sacco’s biggest heist to date.” 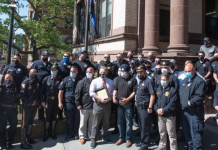 North Bergen teachers, board of education come to terms on new...