After assessing a Twitter threat to “shoot up” the Bayonne Public Schools, local officials announced this morning that the district will reopen tomorrow.

“I’d like to be clear that I am the mayor of the City of Bayonne, I am also the parent of a 5th grader in our school district. I am very confident that our schools are safe, but today we took the extreme precaution of closing out schools,” Mayor Jimmy Davis said at a press conference at Bayonne High School.

The mayor continued that since police department was not able to determine if the threat was a hoax as of early this morning, officials decided it was best to keep the district closed today.

The Hudson County Prosecutor’s Office, New Jersey State Police and the FBI are all actively helping to investigate the incident, which originated on a now deleted Twitter account: @IMorenalaz.

“I assure you that when we come up with the individual, or individuals, that are responsible for this, they will be prosecuted to the fullest extent of the law,” Davis added.

While schools will reopen tomorrow, officers from the Bayonne Police Department and Hudson County Sheriff’s Office will be stationed at each facility.

Bayonne Police Chief Drew Sisk said the department’s technical services unit has been working on finding out who is behind the now deleted Twitter account since last night and are now being aided from their counterparts at the county, state and federal level.

“What I do know, and what I can tell you – we can’t get into the nuts and bolts since it is an ongoing investigation – but the initial Twitter message, tweet, was sent from an account that was activated on that date (last night) and deactivated by Twitter on the heels of our investigation beginning,” Sisk explained.

“As far as the name of the account holder, that was more than likely a made up name, so that avenue is a dead end at this point. At this point, we do have various leads and we are exploring them. Subsequent to the initial Twitter posting, this morning we received an image of a Snapchat image that had similar language and made what could be intimated as a similar threat.”

Sisk continued that four additional leads have been produced as a result of the Snapchat image, which he clarified the department received this morning, though was unsure when it was initially posted.

While the video quality is not the best, Davis streamed the 12-minute press conference on his Facebook page: 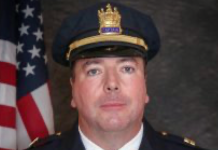