A former Mayor Jimmy Davis campaign advisor and current city hall employee PJ Leonard, revealed that the city has been providing health benefits to at least some of the part-time elected officials that sit on the council – a violation under state law – as well as much more in a vicious speech.Â

Before Leonard addressed the council, he was advised by Assistant City Attorney Karla Garcia to mind his Ps and Qs.

â€œFor your benefit, as well as the room’s benefit, the council members have been given legal advice that they are not to respond or comment tonight due to the fact that some of what you may say can be [the] subject of pending [legal] matters.â€

Leonard’s first remarks were concerning the real estate deals being done through Keller Williams, where Rob Wondolowski – the director of Bayonne Municipal Services – is an agent.

â€œWe donâ€™t really think itâ€™s a coincidence that Little Nicky [Chiaravalloti] took a job at Weiner Lesniak and developers fired their lawyers and hired Weiner Lesniak to represent them. Do we?”

“Or utilizing a consulting company like Suburban Terrace Inc., which is spearheaded by Mr. Demarcoâ€™s friend, Jeff Meyer, who consults for the mayor?

During his address to the council, Leonard also discussed the disciplinary action taken against him for allegedly using the word â€œscumbag” at City Hall.

â€œMr. Demarco has hired, using the city monies, an outside law firm he had dealings with prior to Bayonne, to argue a claim that I used the â€œsâ€ word so he can try to blemish my clean record as a City of Bayonne employee. How much will this cost the city?â€

Leonard also been accused of exposing the certain activities of the city he called â€œwrong doingsâ€ because he was not given the salary he was promised.

He did admit that he was promised a $50,000 salary for handling â€œconstituent servicesâ€ on November 2013 but according to his statement, since Demarco came into office, he was then promised a $35,000 salary and should start as a clerk.

â€œIf the concern for the budget reflected lower wages, why did you add over $2 million in new salaries and benefits?â€ asked Leonard.

The biggest issue was on the illegal health benefits to part time council members.

Leonard made “protected communications” to the State of New Jersey’s Civil Service that the part-time council members in the City of Bayonne were receiving illegal health benefits.

According a letter from the state’s Department of Community Affairs, the â€œdivision subsequently confirmed with the City that the State Health Benefit Program (SHBP) health benefits are, in fact, being provided to part-time elected officials.â€

â€œWill these premiums be paid back to the city?â€ Leonard inquired. 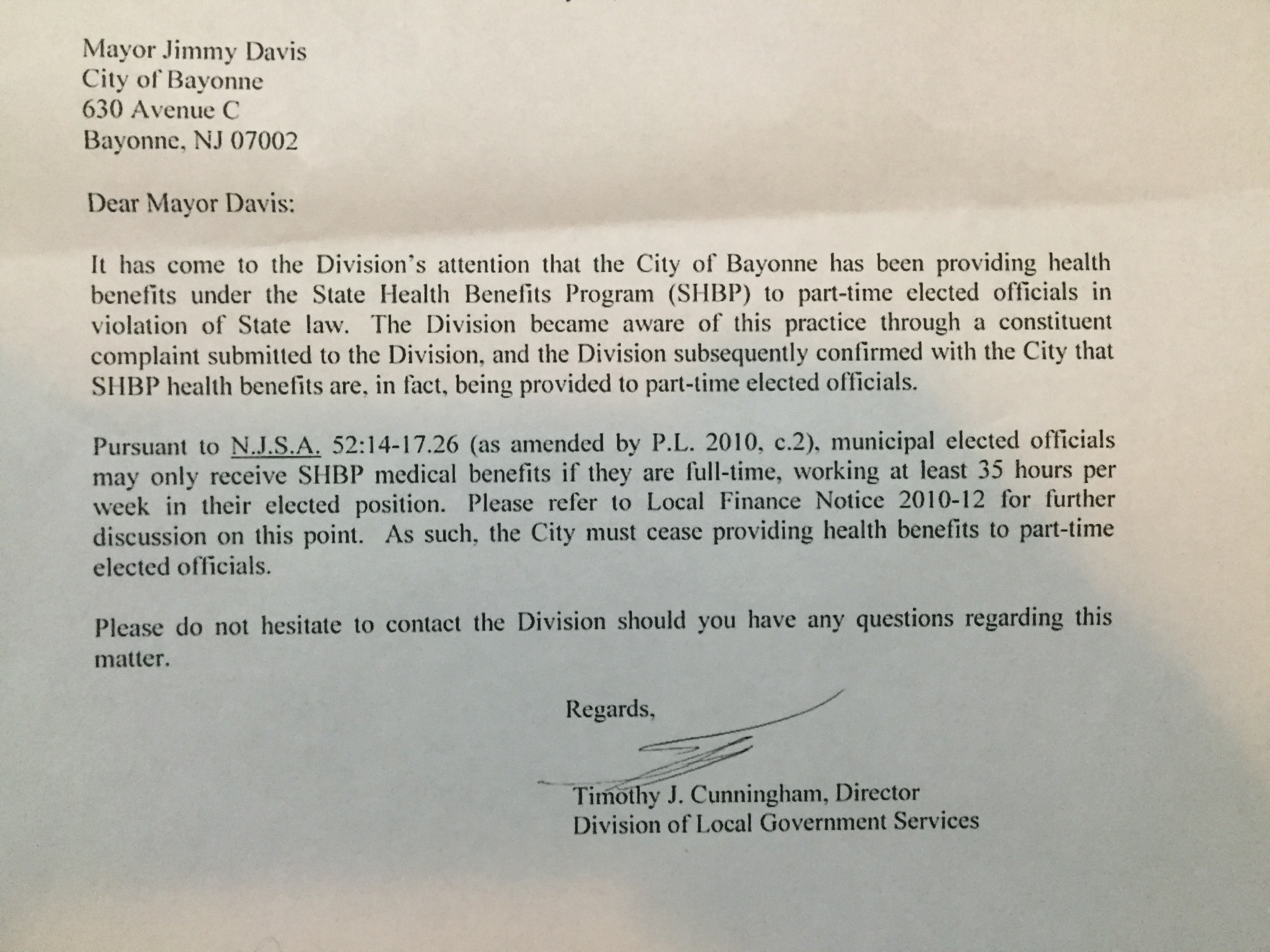 A call was placed to Andrew Casais, Davisâ€™ chief of staff, regarding Leonardâ€™s allegations against the administration.

â€œWe received a notice form the state, that the practice [of providing council members health benefits] should cease,â€ stated Casais. â€œThis is a practice that has gone on through several administrations.â€

As for the alleged $5000.00 contribution by an engineering firm, Casais told Hudson County View, â€œI donâ€™t really know what he [Leonard] is referencing.â€

Leonard, also a filmmaker, is preparing to move out of New Jersey in an effort to get his Hudson County-based TV series off the ground.

Jersey City to allocate all of their COVID-19 vaccines to teachers, BOE staff next week