During her first formal county endorsement, Lt. Gov. Kim Guadagno (R) said she thinks “Hudson County can put us over the edge” with 45,000 Republican votes in November.

“Kim Guadagno is the person whose going to open the doors of the state for the entire community. You’re not gonna be a Puerto Rican, an Ecuadorian, a Cuban: you’re gonna be part of the American Dream,” said Hudson County Republican Chairman Jose Arango, also the Republican chair of the county chairs.

“You came here because you were looking for a better future. With Kim Guadagno, you’re not only gonna have a strong public education, you’re gonna have choices, because Kim Guadagno wants you to have the same choices the regular American population have for their children.”

“Thank for very, very much for an endorsement, the endorsement, for the very first endorsement I’ve officially received on behalf of Guadagno for governor,” she told the room of about 50 people.

Guadagno, a former Monmouth County sheriff, noted that her campaign logo is in purple since partisan lines aren’t necessary when discussing issues such as affordable living and making constituents feel comfortable calling Trenton leadership when they need a hand.

She also praised the diversity of Hudson County when explaining that the area is a great microcosm for what makes the state thrive.

“This campaign is about you. One in five people in New Jersey is born outside of this country,” Guadagno exclaimed.

“You are the greatest selling tool we have for creating jobs in New Jersey: you’re entrepreneurs, all you want is a little hand up – not a hand out – and you want your children to be education in the best public or charter schools there are.”

“I think that Hudson County can put us over the edge, we could get 45,000 votes and Hudson County could be ground zero for my campaign in terms of winning the governor’s office in November,” stated Guadagno.

Republicans shaking up the Democratic establishment in Hudson County is an extremely rare occurrence, though Gov. Chris Christie (R) secured the endorsement of state Senator (D-33)/Union City Mayor Brian Stack to try and even the playing field in 2013.

Guadagno, who ran with Christie in 2009 and 2013, has not yet given any indication if she plans to draw on bipartisan support to bring out the Hudson County vote in a big way.

For the time being, Guadagno’s toughest Republican rival is Assemblyman Jack Ciattarelli (R-16), who has been critical of the lieutenant governor not having a bigger voice during Christie’s tumultuous second term in office. 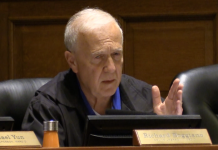