As their contract woes continue, the Jersey City Education Association is going after Mayor Steven Fulop in light of cops ticketing supporters who honk their car horns in support of the teachers – though the mayor’s office says this only occurred in very rare instances.Â 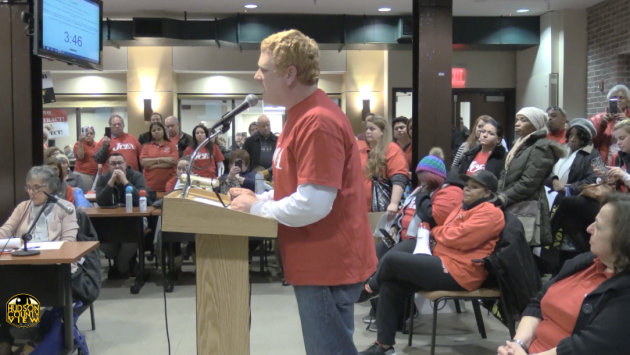 â€œFulop claims to be a progressive mayor. You would think that would include supporting the
cornerstone of our middle class â€“ unions â€“ and the cornerstone of our democracy â€“ public education and the educators who make our schools great,â€ JCEA President Ron Greco said in a statement.

Greco also called the action of ticketing drivers who support the teachers “a regressive anti-union action.”

The union has hosted a number of peaceful protests in front of schools for several weeks, with drivers getting tickets for honking coming to light as the result of a Facebook Live video posted by teacher Mark Azzarrello on Thursday.

City spokeswoman Kimberly Wallace-Scalcione said that tickets were only issued in five instances after receiving several complaints from residents.

“After weeks of protesting outside the schools before the start of the school day, the police department and City Hall have received numerous complaints from residents regarding some drivers sitting at a traffic light or in front of the protest for an extended period of time and holding down their car horns for a very long period of time,” she said.

“Residents in the community complained and as a result, the police responded, but only issued in reality FIVE tickets citywide for people that sit in front of the protest and hold down their horn for prolonged periods of time disrupting the community.”

Scalcione further stated that if someone casually honks their horn in support and continues driving they will not be ticketed, as well as that City Hall has no issue with organized protests.

Another union that Fulop has an icy relationship with, the Jersey City Police Officers Benevolent Association, wrote a Facebook post on Friday in support of the teachers, taking their own swing at the mayor.

“The POBA stands with the JCEA in their efforts to secure a fair contract. We encourage all Jersey City residents to call Mayor Steven Fulop and tell him that our highly trained police officers should be going after criminals, not our cityâ€™s educators that are exercising their rights to speak out peacefully,” they wrote.

Earlier this month, Fulop and other city officials announced that the police departments off-duty security detail program is being abolished, citing an ongoing federal corruption probe.

Without a contract since the start of the school year in September, Jersey City teachers have pleaded with the board of education to provide Chapter 78 relief for months – so far to no avail.

Their last negotiation meeting took place on Saturday morning and no new progress was made, Greco said.

JCEA members met at the Casino in the Park this afternoon to discuss what the union’s next action will be. For now, a strike appears to be off the table.

â€œOur educators want to take the JCBOE at their word that they want to settle a fair contract at the table. We want nothing more than to get back to work under a contract that respects the expertise of our members and the need for affordable healthcare,â€ Greco added.

Two Jersey City men busted with a kilo of heroin with...