After the Jersey City Redevelopment Agency axed a redeveloper deal with the the Morris Canal Community Development Corporation (MCCDC) last week, the group organized a protest across from the JCRA office this afternoon. 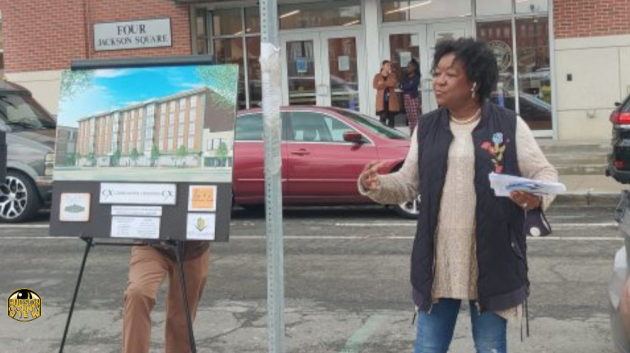 “We need the JCRA to give us our project back that we worked so hard for. We did what developers need to do to get their project in the ground and built up, and the JCRA has not respected us for that,” MCCDC Executive Director June Jones said at the event.

“Nor do they even respect us to discuss this issue. If [JCRA Executive Director] Diana Jeffrey had an ounce of compassion for us, I think she would have at least called us to the table. And for some reason, they don’t want us at the table. And that’s why we were on the menu February 15th. They took our project: We want the project back and hope they reconsider.”

The JCRA voted unanimously (7-0) as part of their consent agenda to remove the MCCDC as the redeveloper for the Communipaw Crossing project at their February 15th meeting.

While they did not elaborate on why they made that decision at the meeting, they claimed in prior correspondence with the MCCDC that they did not fulfill their commitments on the project, located at 408-420 Communipaw Ave., where they received their redeveloper designation in 2003.

“This is something you don’t see every day, a Black female building housing for our community. It should be a plus for this administration. However they took it as a negative,” said resident Carol Tyler.

“I am absolutely disgusted by the JCRA,” added Jeanne Daly before she yelled across the street at their building. “Hey! You guys! What do you think you are doing? Look alive!”

Like Jones, who unsuccessfully ran for council at-large in November, she claimed the action was retaliatory since the MCCDC supported a lawsuit by the Fair Share Housing Center that struck down the city’s previous inclusionary zoning ordinance in August.

She added that that an e-petition has produced 3,209 letters asking for the JCRA’s reinstatement as the project redeveloper in less than three days.

Jones noted the environmental clean-up nature of the project and recounted that her father died from asbestos working for the Central Railroad, which was previously based in Jersey City.

“Greed will drive a man to do things where he doesn’t give you any consideration. We live among so many toxins. Nobody really steps up and takes responsibility.”

According to Jones, the JCRA initially assigned them the project in 1996 as a community group that then became incorporated with a developer to push for affordable housing.

Jones noted they selected Berry Lane Park as a site in need of remediation in 1997, though it wasn’t completed until 2016. She added securing ownership of the property took time.

“It makes me believe they don’t want minorities to have a piece of this. This is what disparity looks like. We created and paved the way for development in the Morris Canal area and Lafayette. The JCRA has created a lot of the delay we face,” Jones asserted.

The MCCDC made their plan for the site on Communipaw Avenue in 2016 in eight months and it has remained the same since.

“Since 2003, this development has failed to make any progress despite development happening everywhere, and instead, they’ve disqualified themselves,” she said.

“She was awarded this project because it was supposed to be a non-profit community development project for homeownership, but over the past 19 years, she has tried to turn the project into a for-profit development, she tried to reduce the affordable housing obligation that was initially agreed to, and she tried to circumvent safe environmental remediation requirements for the property.”

Editor’s note: This story was updated with a comment from city spokeswoman Kimberly Wallace-Scalcione.