For Jersey City’s PATH commuters, the looming possibilities of a strike posed by ongoing labor disputes embroiling the rail service were hard to miss. 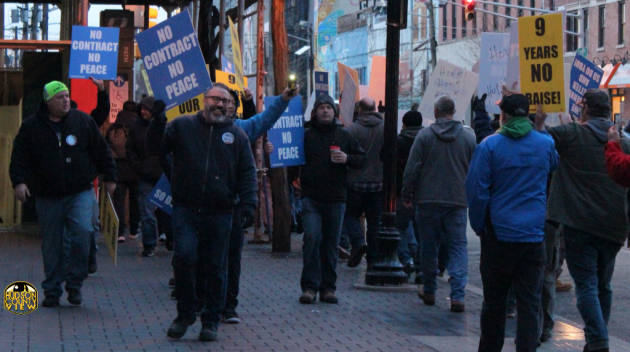 Hundreds of employees of the PATH line held a marching formation for several hours at the Grove Street station to air their grievances about a long-term impasse in contract negotiations between over 800 workers, across eight different unions, and Port Authority of New York and New Jersey.

Chants of “nine years, no raise,” were shouted by electricians, toll collectors, inspectors, police officers, engineers, among many others, taking laps back and forth around the entryway of the PATH Station as onlookers in cars honked their horns in approval.

All PATH line workers have seen neither a contract they’d settle with, nor a pay raise, in nearly a decade.

Union leaders at the event claimed that the contracts offered thus far were “substandard” compared to recent contracts made for NJ Transit and other commuter rail services in the Northeast.

“It’s been ongoing since 2011,” Railway Independent Transit Union president Joseph Dominiczak said. “In the meantime, the PATH management have been given very generous raises in salary and pensions. They didn’t make an initial offer until we were five years into the process. We’ve been in mediation for five years now, and as you can see, the employees have had enough.”

“[PANYNJ] has essentially been telling us to ‘take it or leave it’ with their offer. That offer includes substandard wages, not enough money for our pension, and a complete dismantling of our healthcare fund. An unsustainable burden of the cost falls on the employees due to increased health insurance deductibles. The people here are everyone who make the PATH go every day.”

Arthur Davidson, a chairman of the International Brotherhood of Electrical Workers, said that his union has given up on reaching an amicable contract internal to the bargaining process.

Instead, they will rely on federal third party intervention under the auspices of the federal Railway Labor Act as the final step to setting a 90-day strike authorization period.

Railway Labor Act will allow a federal mediation board to make a request to President Donald Trump (R) to appoint two emergency boards, which would solicit feedback from both sides and formulate their own recommendations for the contract.

“My union and a few others requested a release from mediation a couple weeks ago, and we’re waiting to see if they’ll decide to give us that release. Engaging in mediation with PATH has been fruitless, so it’s time to move on to the next step,” Davidson said.

“A presidential Emergency Board’s recommendation is not binding, but 98 percent of the time, the parties reach an agreement, and with the nature of our impasse, we feel it’s necessary to have third party intervention.We’re hoping to get that release, otherwise you’ll see a lot more dissatisfaction coming from the employees we have here today.”

Should the unions and PANYNJ fail to reach an agreement, the next step for union leaders might be kicking off the nine-month authorization process for a strike, affecting the commutes of hundreds of thousands of frequent passengers.

“PATH has been intransigent in their position and have stonewalled the unions at the bargaining table,” PATH Labor Council, made up of all eight PATH unions, said in a statement.

“Our members move 300,000 PATH commuters daily, they rebuilt this railroad after 9/11 and Superstorm Sandy. Many have paid for their dedication with their health and tragically with their lives, as cancer, heart disease, COPD, and countless other medical conditions have unfortunately become commonplace on PATH as a result of exposure to asbestos and other toxins in the tunnels and railcars.”

In their own statement, the Port Authority said that significant strides had been made in negotiations in the past 18 months.

â€œEighteen months ago, every one of the Port Authorityâ€™s more than 5,000 unionized employees was working under an expired labor contract,” the statement says.

â€œToday, more than 90% of the agencyâ€™s unionized workers are covered by brand new collective bargaining agreements.â€

PATH workers have held strikes on two separate occasions throughout the rail line’s history. Workers walked out in June of 1973 over demanded salary increases, to return one month later. A strike in June of 1981, which lasted 81 days, subsequently became the longest strike in PATH’s history.

Mayor Steven Fulop took to social media to commend the protesters’ efforts, stating that “treating the workers fairly is linked to having a better PATH product.”

Standing w/the hard working people of @PATHTrain as pretty much all them havenâ€™t had a contract in 9 yrs from The Port Authority. If you believe treating the workers fairly is linked to having a better PATH product for everyone – retweet @GovMurphy @NYGovCuomo pic.twitter.com/lKtMjVjJhx

Video of the PATH Labor Council addressing the Port Authority Board at several recent consecutive public meetings can be found here.