With the arrests from Hoboken’s SantaCon more than tripling from last year, city officials are already discussing the possibility of making this the last Saint Nick-themed bar crawl in the Mile Square City. 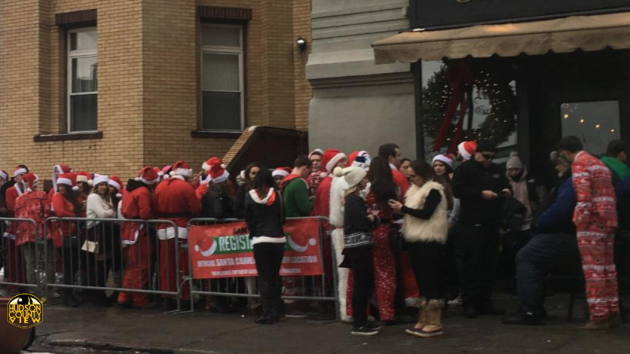 The annual bar crawl that spans through most of Washington Street took place on Saturday and led to 17 arrests, 51 city ordinance summonses, 32 motor vehicle summonses, 55 people were transported to the hospital, according to Police Det. Lt. Edgardo Cruz.

Cruz also said that the police department received 289 calls for service between the 16-hour period between 12 noon and 4 a.m.

Those numbers all show a significant jump from last year, were only five people were arrested and just 30 city ordinance summonses were written.

Police Chief Kenneth Ferrante, who is notorious for live tweeting the alcohol-induced chaos throughout the Mile Square City, noted that no officers suffered serious injuries, though one was punched in the face and another was spit on.

Fortunately, no officers sustained injuries that needed medical treatment, even though one officer was punched in the face, one was spit on and one had blood get onto her hands. No victims or suspects sustained serious injuries even though there were many fights thru day & night!

In one example of the drunken belligerence that has caused many city residents to disdain SantaCon, Janelle Chirino, 21, of North Bergen, was exiting Hoboken Bar & Grill when staff advised police they were having a problem with her.

According to authorities, Chirino became “extremely agitated and unruly” as police tired to calm her down, later refusing medical attention and hit one of the officers in the face, as well as an EMT, as she was placed on a stretcher.

She received a summons and continued to be a hassle as she was transported to the Hoboken University Medical Center, officials said.

Early on during SantaCon, Ferrante also mocked the fact that the event was supposed to be for charity.

The progression of these days also lead to violence at the eateries as now we have a fight call at Impostos which is quickly brought under control. Remember, this is publicized as a “Charitable” event. @News12NJ

Also on Twitter, Mayor-Elect Ravi Bhalla said he “will review every available option” to prevent the bar crawl from taking place next year, later urging his followers to sign an online petition asking to stop SantaCon.

I will review every available option. Residents also need to make their voices heard. We shouldn’t have to subsidize a few bars getting rich off our tax dollars! https://t.co/1bZ0sexuCS

Enough is enough with SantaCon – in addition to exploring legislative options, please consider signing this petition which we will deliver to the participating bar owners, letting them know this event is NOT acceptable in Hoboken https://t.co/nU3AGx78AT

A spokesman for Bhalla did not immediately return an email seeking further comment.