Jersey City teachers are expected to go on strike today after a six-and-a-half hour board of education meeting was unable to yield a new contract.Â 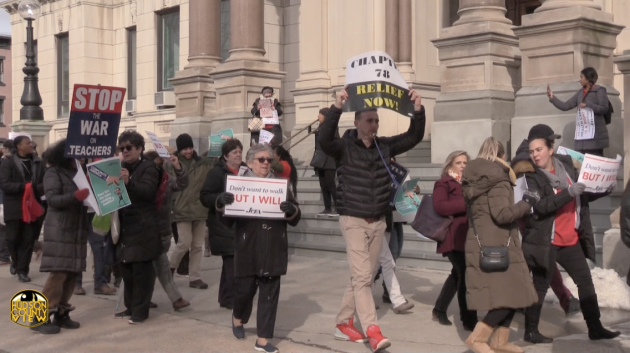 The meeting didn’t end until about 12:30 a.m. this morning, and while many were hopeful, a new deal was unable to be struck.

While teachers were hoping for the BOE to approve their contract within an hour or two of their meeting, they were informed around 10:30 p.m. last night that a strike was likely, sources said.

At a large-scale protest in front of City Hall on Wednesday, Jersey City Education Association President Ron Greco said it’s “game over” if the school district was unable to figure things out last night.

Although the JCEA did not publicly declare a strike in the early hours of this morning, the school district had already prepared for such an event.

In an email from Superintendent of Schools Dr. Marcia Lyles to district parents, she saidÂ  schools will be running on a half day schedule, from 8:30 a.m. until 12:45 a.m., today, with no morning or after school programs available.

“I know the Board is committed to acting responsibly acting in the best interests of theÂ  4,000 employees, the taxpayers of Jersey City, and most importantly, the children of our schools,” the email concludes.

JCEA President Ron Greco said the teachers’ union is not backing down in their fight for affordable healthcare in the form of Chapter 78 relief.

“Quality, affordable health care is a fundamental right for everyone. My members are prepared to step up and take on this fight for everyone, knowing full well that it will be a long, difficult process,â€ he said in a statement.

Board President Sudhan Thomas called the JCEA’s decision to strike “reckless and irresponsible.”

“We are no doubt disappointed with the JCEAâ€™S reckless and irresponsible decision to strike work. The JCEA action will cause immense hardship to the 30,000 students we serve, the parents, the citizens of Jersey City and create additional pressure on the district while we are combating a $ 70 million short fall for our budget 2018-2019,” stated Thomas.

“This is not counting the cityâ€™s resources that have to be deployed to help. The 2,980 teachers who are now participating in a JCEA led job action will experience additional fiscal stress for participating in a strike which is illegal in the state of New Jersey.”

Editor’s Note: This story was updated with comment from JCEA President Ron Greco and Board President Sudhan Thomas.Â