The third super PAC linked to the Bayonne mayoral contest paid for a mailer touting Council President Sharon Ashe-Nadrowski as “honesty and change for Bayonne” over the weekend. 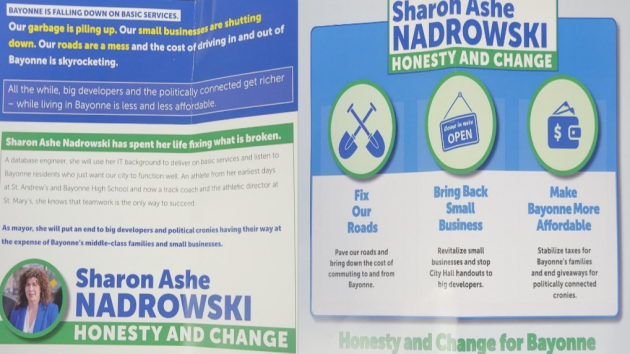 The paid for line on the mailer, which also said Ashe-Nadrowski would fix our roads, bring back small businesses, and make Bayonne more affordable, is 1001 Boxwood Court in Mahwah.

The condominium housing development was most recently owned by Chris Direse, according to public records, and the last public phone number listed for Direse was disconnected when HCV tried to reach him on Monday.

“Once again, the Davis campaign is demanding that Nadrowski reveal who is funding her dark money campaign, because Bayonne residents deserve to know what developers or big money corporations are bankrolling the Nadrowski candidacy.”

Ashe-Nadrowski’s campaign did not return an email seeking comment.

Last week, Team Davis called on Ashe-Nadrowski to identify who donated to the Washington, D.C.-based PAC the Citizens for Strength and Security Fund, a group that 3rd Ward council candidate Peter Franco produced a video for.

At the time, Swibinski targeted Franco over a 2008 court-martial conviction for having sex with a minor.

The PAC had attacked Davis in October and November of last year, but has since gone completely dark is no longer available on the FEC website.

The mayor’s offensive maneuver came after Ashe-Nadrowski blistered him over the Government for the People, a super PAC founded by former state Senator Ray Lesniak.

He admitted to told Politico that the PAC sought to help Davis get re-elected to a third term, with $2,500 paid to consultant Sean Caddle in December, about five weeks before he pleaded guilty to a murder-for-hire plot that claimed the life of of Jersey City politico Michael Galdieri.

The Bayonne municipal elections are on May 10th, where Dr. Mitchell Brown makes the mayoral race a three-way dance and every council seat contested.