Three members of the Hoboken City Council are standing with one of the colleagues after a labor ad attacked him for voting no on the Hilton Hotel project last week. 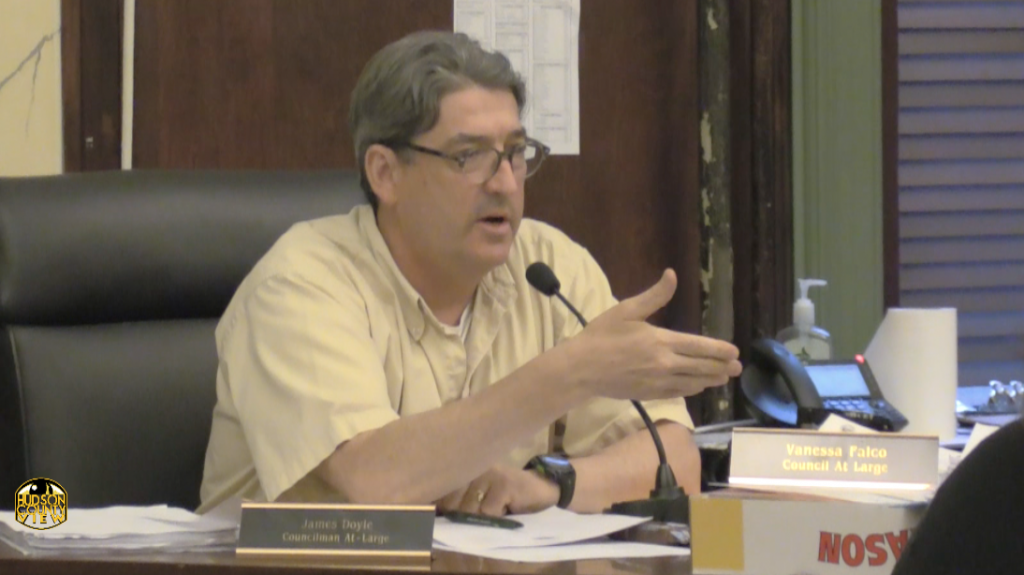 â€œThe commercial was both troubling in its attack on Jim for his vote as it was in its messaging to all Hoboken elected officials â€“ vote ‘yes’ or else. This type of bullying by a union, or any large contributor, will not be tolerated,” 5th Ward Councilman Peter Cunningham said in a statement.

As HCV reported, the 30-second TV ad, which has since been pulled, slammed Doyle for voting no on the project at the October 17th council meeting.

“Hoboken Hilton will be good for our city, but Doyle doesn’t get it. Councilman Doyle: voting no for our children, no to infrastructure and no to Hoboken’s future,” a voiceover in the ad paid for by International Union of Operating Engineers (IUOE) Local 825 said.

The ad can still be viewed on our Facebook page.

The final hotel agreement, which passed 8-1 (Doyle was the sole no vote), was proposed by Mayor Ravi Bhalla and came with $4.85 million in community givebacks.

The plan is 20 percent larger than what was previously passed by the City Council in April 2017, where Doyle also voted against the project.

“Jim, along with then Councilman Bhalla before he was elected mayor, consistently voted for a more moderate hotel. Jim, however, held to his beliefs, voted accordingly and should not have to be subjected to such public threats,” added 6th Ward Councilwoman Jen Giattino.

2nd Ward Councilwoman Tiffanie Fisher indicated that she was not impressed with Bhalla’s comments to HCV on Friday, where he said he disagreed with the content of the ad and union leaders apologized for it, before going on to say he still believes union labor is the best thing for development in Hoboken.

“The messages here are alarming on many levels – for Hoboken residents who should be concerned that our mayor’s alliance with the unions comes first, but also for Jim and other elected officials across the state where the message is clear – if you run afoul of the Local 825 Operating Engineers union, you will pay politically. Neither is acceptable,” she stated.

Local 825 endorsed Bhalla for mayor last year, where Doyle was one of his running mates. A spokesman for the union did not immediately return a request for comment.

“We support Jim and his vote and ask that all other Hoboken elected officials do the same and renounce the bullying tactics employed against him,” the three council members said in a closing joint statement.

In an email, Doyle said he was not impressed with the tone of his colleagues since they used this situation to again take aim at the mayor.

“I wish I could say it is heartwarming that my former council allies are sticking up for me in a time of need, but I cannot. I have not been thrown under any buses by anyone. A silly ad, poorly conceived, is hardly worthy of mention other than for a laugh,” he explained.

“As for their sticking up for me, my council colleagues are merely on a continuing mission to see in any event, any occurrence, any utterance a nefarious intent on the part of the Mayor. They are not blinded from reality but blinded by their flagrant lack of objectivity. While the Mayor and I may occasionally disagree, we respect one another, can each behave professionally, and are friends.”