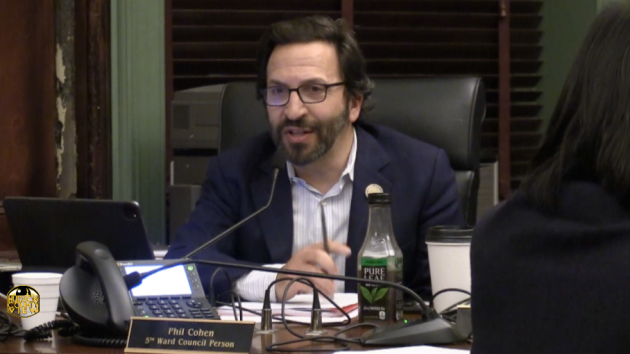 “We believe we warrant a councilperson who prioritizes our 5th ward community and interests, one who is more open and transparent, welcoming of discussion and diverse discourse, empathetic to different socioeconomic backgrounds, and above all focused on our growing neighborhood’s long term safety, affordability, and overall quality of life,” a statement of the recall committee says.

“There are several examples to support this recall, but fundamentally we believe our current councilperson has not represented us as his constituents, instead he has prioritized special interests before our own. Simply stated, we demand real representation in City Hall.”

The committee consists of Perry Belfiore, Rebecca Cohen (no relation to Phil), and Barry Grossman.

Belfiore is a longtime political opponent of Mayor Ravi Bhalla who received a $51,000 settlement from the city in 2017 for getting escorted out of a 2015 council meeting at the direction of then-Council President Bhalla

He declined to comment on the recall effort when reached by HCV this afternoon, while Cohen could not be reached for comment (his cell phone went straight to voicemail on multiple attempts).

Shortly after this story was published, Rob Horowitz, a spokesman for Cohen, called the effort a waste of time and “an abuse of the intent of the recall process.”

“Phil Cohen is an outstanding, hard- working, Councilman who through his twice monthly Coffees with Cohen, and other activities is accessible and responsive to his constituents. Phil has been an integral part of the City’s effective response to COVID-19, working hand in hand with Mayor Ravi Bhalla,” he said.

“He is more than half way through his first term and voters will have an opportunity to decide whether or not to re-elect him in November 2023. Recalls should be reserved for highly unusual circumstances where there is evidence of criminality or other kinds of malfeasance. Led by Bhalla opponent and old time Hudson County pol Perry Belfiore, this effort is not only a waste of time and potentially of tax dollars; it is an abuse of the intent of the recall process.”

Hoboken Deputy Clerk Jerry Lore said that his office planned on meeting with corporation counsel’s office to discuss when the recall election would be held if the effort is successful.

In order to force a recall, the committee would have to submit valid signatures from 25 percent of voters who voted in the last general election within a time frame of 160 days.

Lore said they were also seeking clarity on which election that would be since the ward council seats haven’t been on the ballot since 2019.

Cohen was elected that year as a member of Bhalla’s ticket, the only non-incumbent to make it to the winner’s circle with his predecessor Peter Cunningham retiring after three terms.

A lawyer by trade, Cohen has already announced his intentions to seek re-election next year.

Successful recall elections are extremely rare in New Jersey, with the most recent one in Hudson County being when Albio Sires was able to recall West New York Mayor Anthony DeFino in 1993, though DeFino and his board of commissioners still ended up winning the special election.

To that end, several Hoboken politicos told HCV that they had never heard of a recall election in the Mile Square City’s history.

Editor’s note: This story has been updated with a comment from Rob Horowitz, a spokesman for 5th Ward Councilman Phil Cohen.

Hudson County had about 28.5% voter turnout on Election Day: How...