Tensions between two notorious Hobokenites were less obvious then they have been in the past, but the bad blood between ex-Assemblyman Carmelo Garcia and Hoboken Mayor Dawn Zimmer looks all but guaranteed to last a political lifetime. 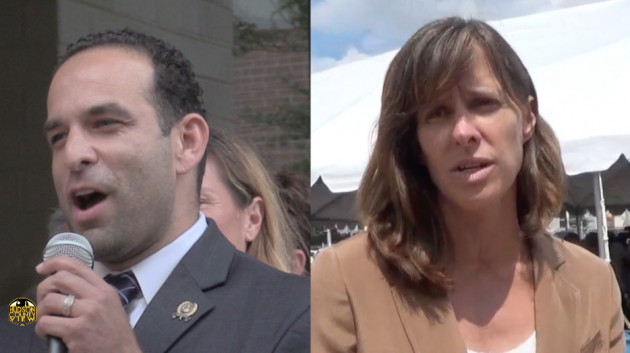 Garcia, also the former head of the Hoboken Housing Authority, publicly declared war on the Zimmer administration after being unceremoniously ousted at a rowdy special meeting in 2014.

Along with HHA Chair Dana Wefer’s constant infighting with Garcia, the tensions here were enough for this to be the top feud of 2014, at least by Hudson County View standards.

While Garcia came up short in an epic battle with 6th Ward Councilwoman Jen Giattino last year, he decided he wasn’t done throwing some haymakers in Hoboken and put Zimmer back in his crosshairs.

In May, Garcia and the HHA filed dueling lawsuits against each other, with Garcia claiming that he was pushed out as part of a scheme orchestrated by Zimmer and her husband, Stan Grossbard.

On the other hand, the HHA said that Garcia routinely violated the procurement policy by awarding hefty no bid contracts to vendors, some of which donated to his Assembly campaign.

Next, through his attorney Louis Zayas, Garcia tried to have the HHA’s suit against him moved to federal court based on the complaints various references to U.S. Department of Housing and Urban Development (HUD) regulations.

Zayas claimed the litigation was being delayed by current and HHA commissioners refusing to be served the complaint, something that was refuted by an attorney for the HHA (I know you’re shocked they didn’t agree).

“They’re playing games. They’re hiding from service. I’ve never seen a government official do this,” Zayas exclaimed at the time.

“A professional processor was sent to serve the commissioners, but no one at the HHA would accept it … that’s how pathetic they are. It is the most shameless thing I’ve seen in the past 20 years. This is an embarrassingly stupid situation,” retorted Joseph Manfredi, special labor and litigation counsel for the HHA.

In October, a judge denied a motion to dismiss Zimmer and Grossbard from the complaint and allowed a racketeering claim made by Garcia to move forward.

While the motion was largely regarded as pretty standard procedure, it affirms that a courtroom showdown could be looming for Garcia and Zimmer sometime between mid-2017 and early 2018 (the smart money is on later rather than sooner, this is NJ after all).

Garcia, who unexpectedly showed up at a Zimmer-hosted Phil Murphy shill-fest (along with the rest of the Hoboken politicos) just days before the aforementioned court ruling was made, continues to quietly make the rounds as Zimmer appears poised for a third term.

In the event that Hoboken Freeholder Anthony Romano (D-5) decides not to challenge Zimmer for the Mile Square City throne in November, Garcia would be an interesting candidate to ensure a spectacular political grudge match (on paper anyway).

Whatever political allegiances the future holds in a critical year for Hoboken, don’t expect a handshake and photo op between Zimmer and Garcia any time soon.